A convenient number of T5’ers (12)  gathered at Wetherby services for this ride, nice and easy split of 2 teams of 6. We decided to leave within about 5 mins, this proved a rather short interval as it will be revealed later.

The two ride leaders had done a prior reccie of the route and we were following each other’s steps. The back markers were Dave Mitchell and Graham West. Out of Wetherby services and a short jaunt onto the B1224 through Long Marston and Rufforth and the A1237 the York Ring Road. “We will spend a very short time on it” , “only the bit we have to do” Brian announced in the pre-ride brief. Albeit short, it was packed with traffic as usual and although we only did a couple of junctions  it took what it felt like an eternity and the six bikes got spaced well apart.

North onto the A19 , a very short time through Shipton  and a quick turn right into …eeerh, a housing estate with a dead end. The T5 U-turn demon strikes again, all bikes turned, back onto the A19 and then a right where we should have turned off, a few yards further along. Definitely the classic syndrome of operator error in not reading the satnav turn countdown properly. 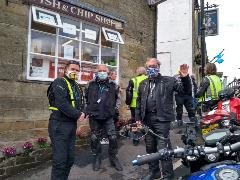 Sutton-on the Forest, Stillington, Brandsby and the wonderful wooded area of the Howardian Hills AONB to Hovingham. A few bikes were at the main café , it looked like a training destination or interim point for another training club. Then B1257 to Stonegrave and a left at Sproxton for a good stretch on the A170 when the bikes got the change to stretch their legs as there was very little traffic. 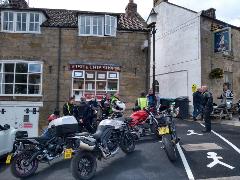 As we approached Sutton Bank we saw a bunch of bikers in the distance. The closer we got the more familiar they became and as we turned right into the Visitor centre … yes , it was the other T5 ride, we caught them up. So it was all 12 of us in tow through Hawnby village and on to Osmotherley. This was the most tiresome part of the ride because of the narrowness of the road and the other traffic we encountered.  Brian had described this first leg as  “a tad longer than usual” but at just over 60 miles and about 1hr 45 mins we could all do with a rest. The lesson here is , if we are following exactly the same route , to leave a longer interval after departure.

At Osmotherley some people had their packed lunches, some has fish and chips and some used the public toilets nearby. 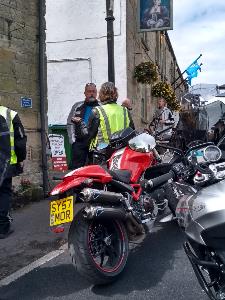 The second half was much shorter, under 1 hour and about 30 miles through Northallerton, Bedale and eventually Masham main square where we parked the two groups separately. People mingled, had a few chats and we all parted for the return home.

Thanks to Brian/Martin for leading and  Graham/Dave for tail end duties.

The piccies are from Osmotherley main square. 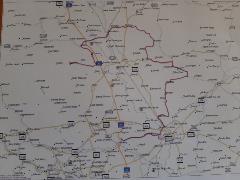