Posted on 21/09/20 |
0 x
13 riders turned out at Monks Cross for Mark's ride to Hornsea, more than the recommended group of six so the group split into two parts with the second group headed up by Pete Tidball.  After Mark's briefing the first group set off and after battling some of the "sunny day" traffic on the A64 the ride set off proper down through Claxton and Stamford Bridge, swinging out towards Barmby Moor before crossing the A1079 towards Sutton on Derwent (passing Pete's group here heading in the opposite direction).

From there through Elvington, Wheldrake and Skipwith before crossing the A163 to Hemmingbrough.  After sneaking round the outskirts of Howden we rode on across the M62 and through North Cave before a right on A1034 took us to Drewton's Farm Shop 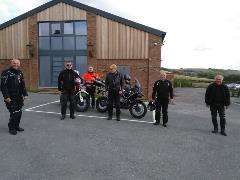 where a table had been booked by Mark for our group, posh or what!  Sitting outside in the sunshine we lingered for probably longer than normal before Mark rounded us up for the second leg of the ride.

Through South Cave, Riplington and North Ferriby, beyond where unfortunately the only way through to the coast is to trawl through Hull along the side of the river but it didn't take long and we were soon back enjoying ourselves heading out on the B1362 towards Withernsea.  Turning North here we then came to the hugely enjoyable B1242 which wiggles its way all the way up to Hornsea, a brilliant road with cross views allowing you to enjoy every bend.

After a pack up lunch sitting by Hornsea Mere Mark led us off once more heading through Brandsburton, North Frodingham and Driffield before picking up the B1252 into Sledmere and down to Fimber for pudding.  Thanks Mark for a great ride and to Jezz for being Back Marker.

Picture of the route below.