Posted on 21/09/20 |
1 x
After my usual recce on Wednesday, which was an absolute breeze, probably down to the change in weather, drizzly and cooler, a sizzling 12 degrees, and my better half had assured me that it would get warmer, well it did,..... 13 degrees at Sandsend, but it did mean my planned route turned out to be relatively quiet.
Anyway, the meet at Monks Cross went to plan, and 6 x T5 er's set off for one of those rides that either goes to plan, or not, then it's just a case that if nobody notices and we all arrive safely at the T & P, and the final destination, it's a result.
But, on a rather sad note before we set off, our T5 leader ( Pete ), was not in attendance as his BM was poorly, a drive shaft bearing or something upon those lines, ..... thank the Lord for chain drive :-)
So, Mark, Chris, Phil, Mike, and Nigel acting as sweeper, set off out onto the ring road as far as the Wiggy roundabout and headed up Wiggy road and the left onto Corban lane, a lovely road taking us to Shipton by Beningbrough, where we did a left then a right onto High Moor Lane, until another left took us in the direction of the Aldwark bridge. 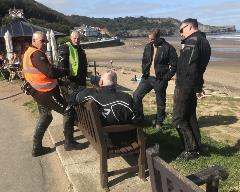 This, was all part of a cunning plan to add a tad more time to the first leg of our ride, though I had expected more traffic on the day to help me out with that, but no chance!
A right taking us away from the bridge, and basically, boxing off, Youlton, Alne, Easingwold, a right before Husthwaite, and then, Coxwold, the wonderful, Byland Abbey, Oldstead, up over the hill past the Gliding club to Sutton Bank visitor centre for our T & P, arriving well ahead of schedule, timing wise, but that's possibly down to the smaller groups that we now ride in, or bad planning on my part.
Out came the thermos flasks and energy bars, and though there is a cafe there, the queue to be served, was just too long :-(
Suitably refreshed the next leg of our ride, for myself is one which I do like, the combination of most types of roads we ride, and that all important bacon and fried egg butty at the cafe at Sandsend.
Not to bore the pants off you, the route took the 6 of us past that other well know feature, Rievaulx Abbey, and onto another of those excellent  roads that take you to Chop Gate and beyond, the beyond being, Ingleby Greenhow, Westerdale, Castleton, Dunsley and onto Sandsend.
I would like to think that, even though this is a fairly well used destination, the T5 er's had a reasonable ride, and possibly some of the roads that weren't too familiar.
Thank you to the brave T5 er's that attended, to Nigel for volunteering to do the honours of sweeper, and to Chris for leading us to Fimber, for the finest brew and yummy that money can by.

Picture of the route below 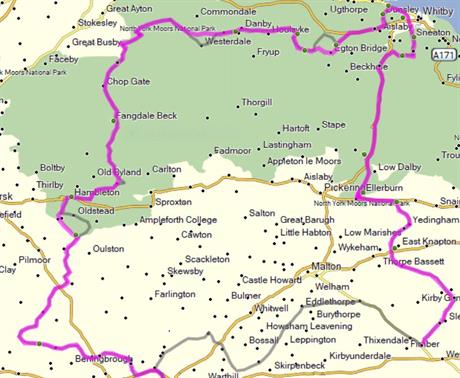