Posted on 17/10/20 |
5 x
12 souls met in 2 distinct groups on a rather murky Saturday. Chris Otter manfully stepped up to lead the second ride using the same route (slightly modified) but with a delayed start.

Taking the back roads from Boroughbridge through Minskip, Markington, Sawley, Rilspith and on towards Masham, but for something completely different we turn sharp left in Grewelthorpe to head through a maze of mud and gravel-covered lanes to emerge just East of East Witton. Then cutting through Pheasant Alley (you know the one past the old pheasant farm) we headed for the moors. 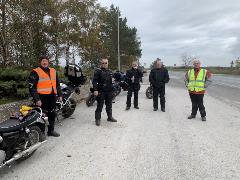 Then came the first deviance - the road over Whipperdale Bank to Grinton was closed for live firing practice so we took the high road to Hawes, stopping for a coffee break along the way where we were passed by a Lone Rider who we swear was Pete Tidball.

Into Hawes we negotiated the packed high street without stopping, turned left to head for Kettlewell where newbie T5-er Rick Illingworth forgot to mark the junction, but after a brief search the three "lost" riders were recovered. 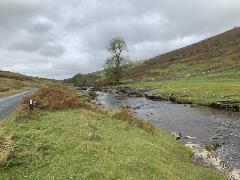 Over the hill to Buckden, where we stopped and had lunch by a babbling brook, then on to Kettlewell and Pateley Bridge where Ian and Nigel  dropped off before the rest of us sampled the delights of Peat Lane. I swear that hill gets steeper and has more potholes and gravel than the last time I passed that way.

Then came the second diversion as Darley High Street was closed so a quick diversion around to Birstwith, with a moment of confusion when some wag had turned around one of the signposts, then Ripley and home. 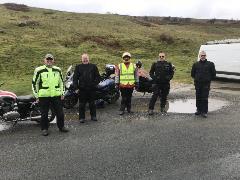 128 miles in all and everyone seemed to enjoy it. All images may be clicked for a larger view 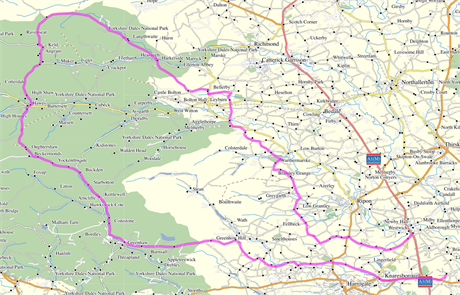