Posted on 27/10/20 |
3 x
The weather forecast for this Saturday wasn't the best, but in the past the worst hasn't arrived, and so the two groups for the OD ride arrived at Monks Cross full of fuel and a positive attitude, a great start.
Tim ( Andrews ), arrived on his new BM, c/w muddy effect graphic option
:-), Chris, Nigel (Burton ) Turton's Triumph sporting a new exhaust end can,  Alan and Tim Crossley making up the 6 in my group. Pete set up shop on the other side of the car park and awaited the arrival of his merry men.
Come the allotted time we headed off, with Nigel opting to do the sweeper duties, Brymor's being the T&P, and the routing taking us on some of those well worn routes to Sheriff Hutton, Easingwold, and Topcliffe, with a off the beaten track, via Turkey Lane ( well the festive season is almost upon us. ), taking us onto the A61, over the bridge and a right took us via Ainderby Quernhow, Carthorpe, Masham, and to our T&P.
The T&P, turned out to be quite different, as Nigel spent his time at Brymor's wisely filling his top box with gratis apples with apple crumbles  in mind, ... yum yum. 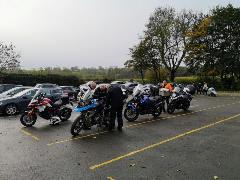 Tim felt the need to make adjustments to the BM's seat, why not, you have try and get it perfect, in the photo, it looks as though it's close enough.
It was at this stage the weather appeared to follow the forecast, as the wind increased, and spots of rain became a wee bit heavier, so, we saddled up for the ride to Malham. Out of Brymor's, turning left and heading to Wensley, past Castle Bolton, Aysgarth Falls, Thoralby and picking up that lovely B6160, to Kidstones, however, by that  time  the heavens had well and truly opened up, were we down, ..... hell no, as there were other like minded bikers out and about, not many :-) 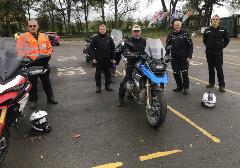 However, as the next part of the route was to take us over the Dales to the destination, and it did not look for an inviting invitation, so, ...... we headed for Bolton Abbey and the A59 Cafe instead.
( This in a way is great as it would allow me to use that route another time. )
Thank you to those who signed up for today, for your great company, and, Nigel for volunteering for sweeper duties, and Chris for doing the return leg taking us homeward.