Posted on 05/11/20 |
0 x
After many hours of measuring, planning and pontificating for this Halloween ride I found that Storm Aiden had decided to join in too! Therefore a last minute witch (sorry meant switch)to Plan B was needed..
So Triumph Nigel,  Suzuki Alan, One & only Chris and Ducati John playing ‘tail end Charlie’ came to join my gang, while Pete was socially distancing with his across the Monks Cross car park.
And so at 10am, I tried to find the route on my satnav, success after a small delay, and then with great intrepidation and laughing in the face of adversity we set off in quite good weather actually on our adventure.
Cutting up through Haxby, then a quick zig zag through Shipton and into the lovely countryside of Newton on Ouse and Aldwark. Beautiful autumnal colours of the leaves in the trees were lovely, however once they were on the roads, along with the plentiful supply of mud from the fields, it made for more careful driving in many places!
Then through the windy, or is that windy lanes, though often both, we skipped through Sessay and Dalton before a quick hop over the A19, past Bagby to our T&P Old Barn Coffee Shop. A lovely cafe where most of us were tempted by their Toasted current tea cakes, the 2nd reason I like Team 5 rides! Yummy!
I should have taken a Team photo at this stage but the Fancy Dress and scary masks were quite frightening so I thought better of it........
So far so good, my quick route had worked and the wind was at our backs, so keeping ahead of some drizzle we set off east. Not sure of the route (just bluff it out, smile & wave) we set off through Kilburn and Wass, what could go wrong! Well my satnav lost interest and stopped joining in for a bit, how I laughed to myself, then directed me through a farmers gate into a field, which I thankfully didn’t take, before getting me back on track towards Malton.
Phew that was close, before it then said I had completed the ride, meaning I did have to stop and recombobulate the satnav again. Then a simple case of going round roundabouts that shouldn’t have been there, twice (though it did bring a smile to my face- think more than 3 is illegal) bob and weave through Malton/Norton to pop back out into the countryside. Then through Birdsall and over the tops we were joined by the winds of Aiden briefly, before dropping down into the quagmire of Thixendale, which did provide some shelter before arriving at Fridaythorpe for a well earned brew and some lunch.
So thanks to my team for having a sense of humour and joining me in Saturday Playtime.
As it happens we got there just in time, as the torrential rains came just as we were leaving, which if we’d had them on my original plan to Lord Stones, Osmotherly, it may have been a bit of a damp ride - but now we can do that another day..................
Tim
Picture of the route below 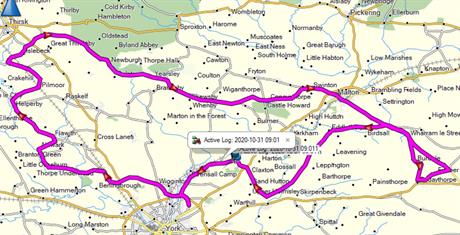