Posted on 29/04/21 |
1 x
The 5 Amigos gathered at Sainsbury's at Monks Cross, on a sunny Saturday morning, ...... John, Alan, Mark, and Ivan ( fresh from last weeks adventure with Chris. ), and yours truly.
In another part of the car park, many, many, many metres away, a small army of T5'ers congregated, and also with social distancing in mind, Pete as there lead, awaited our departure.
Our plan route, which was one that I'd attempted to complete last year but was beaten by the elements, and as I'm mentioned in the brief, it had to be tweaked to accommodate the half day criteria.
The T&P being Brymor's and the final destination Malham, avoiding any conflict with Pete and his merry T5'ers, if it had, the plan had to have gone very badly amiss, if that had been the case, hopefully, nobody would have noticed,.... 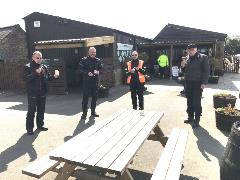 Basically, we headed off, Alan being good enough to cover the sweeper duties, and being a manageable group, only a few occasions did offer the opportunity to mark the junctions. Onto the ring road toward Clifton, up the Wiggy Road, across to Shipton by Beningbrough, and upto  Asenby, a much favoured route of mine.
Then onto Baldersby, Ainderby Quernhow, my how I wish I had the IT skills to attach a route map, and I would then, not have to bored the pants off you with my ramblings :-)
Under the A1, and then a round about route Via Snape to Masham, and then onto Brymor's, sadly, a collection of farm vehicles heading the same direction, .... but the T&P, came at just about every he right time, and it was ice creams all round.
The route there must have been okay, as nobody ducked out, and we headed off, and at East Witton, to the challenging direction of Kettwell, as it took in a good number of roads that had been re-graded, with gravel in abundance, which made for a fair bit of tippy toeing. However, John found time to take a few photos of some Highland cows, which he forwarded to Pete for posting on our site. 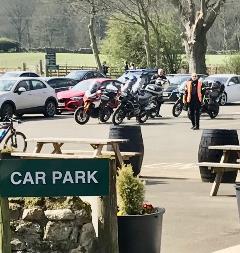 Surprisingly, we made Malham in good time and achieved it in under time frame, where we parked up in a quiet spot in the village car park, and out came various pack lunches, all in all, a very pleasant way to spend a sunny half day riding around our wonderful county at long last.
I thank, John, Alan, Mark and Ivan for signing up for the ride and hope that they enjoyed it as much as I did.
Unfortunately, just outside of Kilinghall the afternoon traffic played it's part in splitting the group on the way home, fingers crossed you guy's made it home, eventually :-)
Ducatti John