Brian Lydamore's half-day ride to the dales, 15th May

Posted on 15/05/21 |
1 x
The weather didn't look too sparking for the day but still four hardy souls turned up in Otley for Brian's first ride lead of the season. Having shaken off the Saturday morning traffic in Otley, and made sure that the contractors were still doing a good on on the new flood defences, we took to the hills, taking the back road past Ilkley and Beamsley Beacon to Bolton Abbey,

Grassington and Kettlewell where we stopped for a coffee. The car park was largely deserted on this damp day, except for a dozen or so riders who arrived while we were chatting.

Then it was the road over Coverdale to Middleham and Masham for our lunch stop, before retracing our ride a little and passing Leighton reservoir (which was full) on the way over to Lofthouses and Pateley Bridge where the ride finished.

Alan Broom and I then followed a similar route part way to his home, but got a soaking on the way for good measure.

Thanks to Brian for a nice ride out, about 120 miles in all. 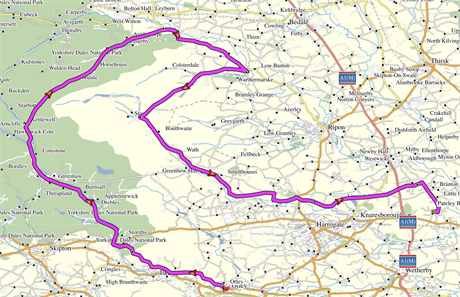