Posted on 30/05/21 |
3 x
Saturday dawned a beautiful sunny day as forecasted and it was great to see a gathering of YAM members at Squires, albeit Sans Observers and Associates apart from one pair who joined the group.  The banter and camaraderie reassuringly good as we all try to get back to "normal"!  Two rides were leaving from Squires today and Pete's was designated "Full Day" status under the new categories and after a detailed briefing the group of seven lined up and set off.

Prime Minister Margaret Thatcher once famously said in the Commons
"U turn if you want to, this lady's not for turning".

Well if she had been on Pete's ride she would have had no option as I was left wondering if I would need to take shoes and socks off to count the U turns after running out of fingers.  Okay, some of them were caused by closed roads (alright three of them) but the rest?  The plus side was we all had a chance to practise our slow manoeuvring skills.

Heading south we quickly cleared Monk Fryston and headed on towards Goole (first U turn here?) to get us "across the river".  Then on through the lovely roads past Swinefleet and Eastoft.  A run down the side of the river Trent before crossing over with a plan to ride North East across to Barton Upon Humber and a first stop at The Old Tile Works.  However fate had other ideas.  Heading towards the Ferriby Sluice we were stopped by a Police car barrier and an officer telling us the bridge was stuck open, thoughts of an Evil Kinieval style jump over the bridge were quickly discarded and the second U turn of the day executed followed by a stop to study the map. 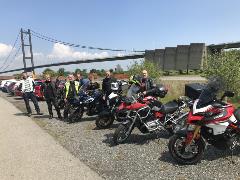 get the other side of the "bridge" meaning by the time we arrived at The Old Tile Works the T&P stop was converted to lunch with very posh nosh around a table outside in the sunshine.

After lunch we mounted up again heading North over the Humber Bridge, Pete had found a fairly straight forward route skirting around the edge of Hull and we were quickly into and out of Withernsea and on to the glorious romp up to Hornsea.  Not so fast said fate again as barely minutes out of Withernsea we found the road closed again and we had to turn around.  Retracing our route we found a minor road taking us back North only to find this road closed as well.  Back we went and further West before we found another road taking us around the blockage and on to Hornsea.  from here it was a short but wonderful hop to the next planned stop, Mr Moos.

The car park here was heaving and the queue too big to consider so after a quick break it was back on the road.  Across to Driffield and then on to Stamford Bridge as riders peeled off to their own routes home along the way.

Thanks Pete for a great day out and John Coe for faultless back marker duties.

Map of the route below.