I had planned to repeat a ride I had lead about 2 years ago but it nearly didn’t happen at all. I had planned to recce the route the day before, however when I arrived at Squire’s on the day before the ride I discovered that I had managed to pick up a couple of nails or similar in my rear tyre. Only one had penetrated right through so I managed to do a temporary repair & limp home. I was still left in need of a new tyre for the next morning. After a couple of calls I located a suitable one at Jax, in York and had it fitted later that day. Phew! 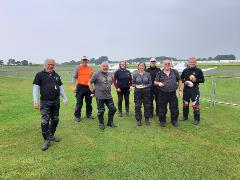 The forecast was not very good on the morning of the ride but eight of us decided it was worth giving it a go. So with Anne wearing her magic waterproof over trousers to ward of the rain, we set off. Left out of the gate and on towards Ledsham, Fairburn, Byram etc, standard Team 5 stuff you know. No drama quite a pleasant ride and Annes trousers were keeping the rain at bay. We progressed happily to Haddlesey and across the A19 through Temple Hirst and Hirst Courtney to Carlton then towards Snaith. Right turn now, through Gowdall and just into Hensal. Here we turned south and duly more or less crossed the Snaith road to head for Pollington at some point not much further on I had a disagreement with my Sat Nav which resulted in the standard T5 U turn. At this point I decided to revise the plan and mentally plotted a modified route to the T & P stop at The Crown garden centre via Whitely Bridge. Just in time as Annes magic trousers ran out of ‘magic’, and while we were enjoying the spectacular flapjack and cakes the heavens opened.

After an extended break and when the rain had abated, we came to the decision to go a more direct route to our destination up the newly repaired A19 as far as Burn then via Henwick Hall to the A1041 and the Selby bypass. Once past Selby we took a right on to the market Weighton road to Bubwith. From there it’s a right turn and a short run to Breighton & the destination, The Real Aeroplane Company.

The Real Aeroplane Company isn’t open to the public and we were there at the invitation of the Chairman, he and indeed every one we meet made us feel very welcome. The catering was a bit limited in range as the club house is out of action and they are operating a field kitchen, but not in quality and really good value. Once we were fed & watered and after a short delay while Tim waited for his second sausage sandwich, we were treated to a look round both the privately owned aircraft and the clubs collection, guided by one of the younger members, a nice lad called Jack. Some of us by this time had headed for home, but Anne, Steve and myself remained as one of the enthusiastic pilots, a man named Ray, took Jude up for a flight round the area in his plane. A great and unexpected end to quite a nice half day ride.

Many thanks to Jude for being back marker and to Graham, Tim, Anne, Steve, Mike and Symor for your company. Thanks also to Charles, Jack and the other people we met at Breighton.