It seemed like forever since the last social ride so I was delighted when Paul (Rushton) pulled together a jaunt through the hills and moors of North Yorkshire last Sunday, starting with cups of tea and a bacon butty at Strawberry Fields café.

There was a brief moment of doubt that the ride could go ahead when we realised Paul was struggling to get on and off his bike after a fall, which had left him with severely bruised ribs and barely able to move. However, it soon transpired that alcohol had been involved and that nothing was going to stop the ride, so we set off with a small but perfectly formed group of riders from across the county, heading north via Wheldrake, Fangfoss, Buttercrambe and Terrington – where we were met with a road closure. Paul rallied forth past the ‘road closed’ signs and went ahead to navigate the pavement option, but decided it was a no-go when pillions were involved. The locals also thought it was a no-go as one of them hurried out with more cones to close off the pathway and scowl at Paul as he did a rare U-turn.

We then meandered along some fabulous roads towards Hutton-le-Hole, not only taking every minor road possible – but also taking extra-minor roads that linked them. One rider – who was clearly more well-travelled than the rest of us – later likened these semi-wild tracks to the roads of Brazil, but that’s another story.

We took in a T and P stop in a tiny courtyard tearoom in Hutton-le-Hole before heading onwards and upwards through Farndale to Castleton, followed by another little detour around the top end of the moors before dropping down towards Fryup and the famous bike barn for – yes, you’ve guessed it - a lunchtime fry-up.

One or two of the group headed back home after this, while a few die-hards meandered on through some of the finest roads in the Wolds (no mention of Brazilian roads at this point) to the final pit-stop of tea and cake at Fimber.

The weather and company was fabulous, the route was – as you would expect from Captain Paul (bruised ribs or otherwise) – well paced and stunningly beautiful, and the whole day was a reminder of everything we had been missing. Roll on the next one! 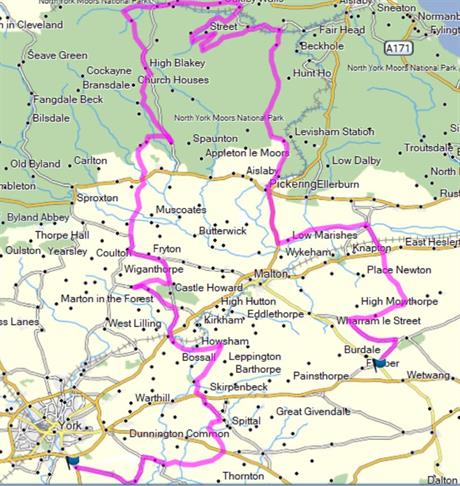