Thank you to John ( sweeper duties, all for the small bribe of a small boiled sweet :-) ,… ), and, to David, Jezz, Michael, Gerry, Ivan, David, Ian and Mark for attending today’s ride out.

A glorious day, weather wise, but the routing could have been better, but the masses were on the move, and the A64, was a log jam.

Also, a few curved balls lay in wait after the T&P in the shape of road closures.

But the hymn sheet was boxed off, even though it did take a tad longer to achieve it.

Ian had David in his sights for a check ride, and they found a shady spot at the Old Barn T&P, for the debrief, it must have been okay as Dave’s immaculate textiles didn’t show any signs of a beating.

So, the route to the T&P was pretty old hat, .. right out of Squires, boxing off, Cawood, Elvington, Dunnington, past Pete’s and across the A64, past Chris’s, Brandsby, Byland Abbey and Bagby.

Ian, had other commitments so he left us at the Old Barn.

The route to Manor Farm Cafe, can only be described as the pants.

3 road closures and the obligatory U turns, didn’t help, but that the lot of a T5’er if you chose to lead :-(

Fortunately, the god’s smiled on me and the team made light for my failings, …. well, we made it to our late luncheon and joined the queue at Brymor’s, where a chiller unit did a fine job of cooling one member down while we waited in line.

There we have it, no map /route but it was a well used one, you’ll know it off by heart.

Hopefully, the photo makes it, sadly it was at Brymor’s and a few had peeled off, …. Thank you all again for attending,… though Judith did nab one T5’er for her half day ride :-) 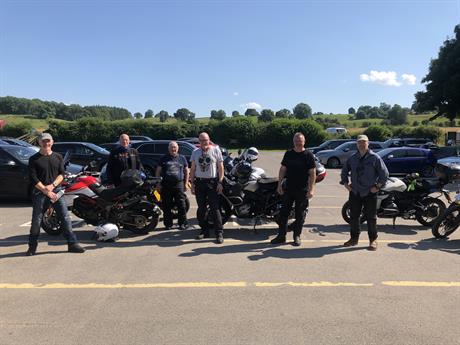