Posted at fairly short notice, there were still ten of us setting off on this ride from Squires - me, Alan B, Graham, Shane (in star mode with his shades on), Rob M (promised him no gravel - more on that later...), David R, Gary, Mark, Neil, and Luke taking back marker. Note to self - don't form up alongside the full dayers next time - sorry Gary! Spotted you just in time.

Heading towards Cawood in bright sunshine, the plan was to go through Kelfield but the road crew were chipping that stretch so a detour (which was probably the better option anyway) was taken through Escrick and Skipwith to reconnect with the route at North Duffield. Onto Bubwith and a left turn towards the B1228, then right to take us over the reopened river crossing at Hagg Bridge.

The loose chippings between Melbourne and Allerthorpe slowed us down a bit (rookie mistake #2, no recce - but technically wasn't gravel...) and we eventually arrived at the Mile Café in Pocklington where Mike V had already bagged us a table with some shade. There were a couple of planned departures after refreshments, then the remaining riders set off for the A166 via the lovely sweeping uphill bends past Millington.

Or that was the plan... until we came across the long snake of distance runners, who were probably paying someone for the privilege of slogging up the Wolds on one of the hottest days of the year. Unfortunately most of the group were behind a van at this point, which found it more difficult to pass the runners than the bikes behind him would have.

Turning right on the A166, we finally regrouped at Fridaythorpe, where a few more riders headed home (hope you got the result you wanted in the rugby Rob). The next leg of the journey took us down to Fimber and over the tops through Wharram Le Street, turning right at North Grimston and through the pretty villages of Settrington and Scagglethorpe to join the westbound A64 for a short distance to the Pickering turn off.

NY500 is a fairly new café situated on the Pickering road, just after the left turn for Flamingoland. They helpfully provide large yellow pucks in the car park for the use of visiting bikers, and it's proving a popular stop so the gravel surface is quite compact already. Photo courtesy of Mike V, thanks to Luke for back marking and to everyone who came - not my best route, but worthwhile to recce a new stop. Enjoy the weather while it lasts! Jude 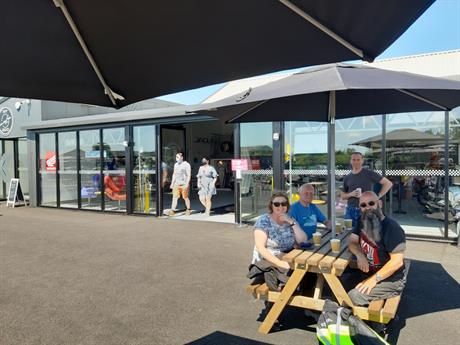