All were present and the Ride Briefing took place, John Coe kindly volunteered to be the Back Marker. First T&P schedule at Masham the weather conditions looked ideal for the day ahead. Hopefully we would not encounter too much bank holiday traffic, but caution for agricultural vehicles due to harvesting activity.

We all lined up, off we went turning right out of Squires heading towards Sherburn, in hindsight I should have taken the road via Towton due to the road works! Turning left at Sherburn to Tadcaster towards Wighill ,Thorpe Arch onward to Cattal over the bridge after waiting for the Audi Estate who had clearly jumped a red light or did not see it! heading to the A59 turning left and crossing the A1 and turning right towards Flaxby. At this point it was evident that the group had been delayed at some of the junctions, traffic lights etc.

I pulled over waiting hopefully to see the sight of all riders turning right off the A59 what a relief it was when all 14 of us were present! (Thanks John) It may have been 15 at some point as a think a lone rider was adopted into the group for a short period!

Onward to Masham then my Sat Nav had a wobble my first lead ride panic ! (Human Error) After another quick stop and Sat Nav reset off we went.

The route took us through Arkendale, Copgrove, Burton Leonard crossing the A61 at Wormald Green through Markington. We then proceeded North to Sawley, Risplith passing the G&T’s Ice Cream Parlour on the way maybe a future place to stop. Turning off the B6265 heading to Winksley on some interesting twisty roads. Due to timing I 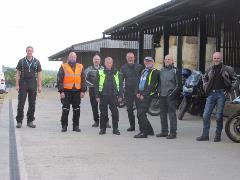 decided to head North up Winksley Bank instead of heading towards Laverton. At this point we encounter a large tractor heading straight towards us, we all gracefully gave way! On the approached to Kirby Malzeard I encountered some road works with a diversion and as I was off the planned Sat Nav route I wasn’t sure to turn right or left? initially I indicated right then changed to left (apologies for causing a bit of confusion behind) it was the right choice a U turn was avoided! North to Masham we headed.

After the T&P at Masham 12 of us lined up for the 2nd part of the Journey to Ravensworth, Many thanks to Graham & Tony for joining us on the first leg of the route. 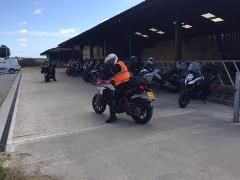 The route took us through Thornton Watlass,Thirn heading North past Thornton Stewart Reservior encountering a combine harvester causing some delays fortunately we were behind unlike the Audi coming the other way fairly well embedded initially in the grass verge. This enable the group to re-group. Heading North to Marske via Constable Burton, East Huxwell, Barden Moor we took a left turn onto Cordilleras Lane at Marske towards Helwith which is a place in the middle of nowhere which is a dead end when get there. After climbing the 20% gradient through the forest we then all enjoyed the spectacular unspoilt views in front of us for miles and no other vehicles on the road to be seen. We eventually started descending down towards Newsham after enjoying the far reaching views helped by the perfect weather conditions. The remainder of the journey was back to tight country roads through more picturesque villages which we had been encountering all day. At this point some riders had experience oncoming drivers reluctant to pull to one side at a narrow bridge causing a short delay.

We all arrived safely at the Stoneygate Cafe at Ravensworth with plenty of parking for all. After enjoying lunch and the kind hospitality of the staff we were bound for the final part of the day. At this point Chris Otter, John Cowles, Mark Hopwood, Shane Massey left. Many thanks for joining the ride to Ravensworth and staying for lunch, hope the A1 was not too busy on your return journeys. 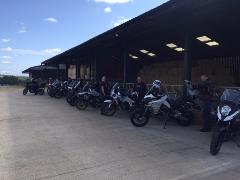 Final destination Brymor we set off heading west through the picturesque village of Ravensworth passing the ruined 14th century castle on the left going into the village and the old Morgan I think? on the village green with a trailer attached which complements the village scene. It always appears to be parked in the same place every time I’ve been through recently.

We headed towards the A66 on entering the road we took the first left turn off heading towards Newsham, Barningham,Scargill running parallel west with the A66 with no traffic, unlike the A66. We turned left onto Stang Lane heading towards Stang Top which is quite a undulating road in places to which the effects were experienced by some! Heading through the forest tree felling has been taking place maybe it will help towards the current shortage of wood! However we all experienced spectacular views from Stang top and excellent riding conditions. On reaching Raw Bank we turned left and first right heading towards Healaugh going through the only Ford of the day (road was a bit damp) then to the gated road which Jezz kindly took on gate keeper duties. We turned left onto the B6270 and we headed through Reeth/ Grinton and negotiated the awkward junction at Grinton towards Wipperdale Bank and took the right turn to Redmire/Castle Bolton. Rumour has it a U turn may have been performed at this last junction. (Not the group)

On reaching the Junction at Low Lane and Mightens Bank there was only myself and Mike what's happen! we pulled over and awaited the others to arrive after a few minutes we were starting to re-grouping it appears the U turn may have been a factor in here.

Thanks John for doing a incredible job as the back Marker again! back to full strength along the familiar roads to Middleham,Jervaulx Abbey to Brymor the final destination.

We all enjoyed the traditional Ice Cream stop at Brymor and the excellent summers day!! We successfully managed to avoid the traffic and no rain! The only queuing was for the ice cream but well worth it , thanks Pete. I would like to thank you all for attending my first ride I have led with T5 and hope you all enjoyed the day, also hope it’s Adam's first ride of many with T5. Thanks John for back marking duties and keeping all riders together, job well done.  Picture of the route  below. 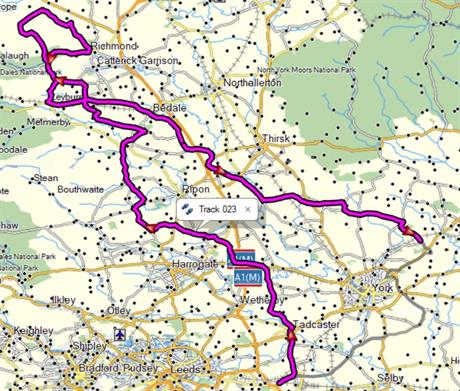