Drivers briefing took place outlining the route/timings/safety for the day.

Chris Otter kindly volunteered for back marker duties and David Bunn was welcomed into T5 for his first ride after recently passing his test.

All 17 riders lined up and Chris signalled all were present, we set off to Pateley Bridge turning right out of Squires.

The route took us to Towton avoiding Sherburn traffic lights! Taking the left turn to Stutton village heading towards Toulston Lane to Bramham over the A1.

At this point an unscheduled stop was required as the leader had forgotten to put his yellow jacket on!!

We headed to East Rigton/East Keswick turning left onto the A659 to Harewood the timing of the traffic lights allowed a full re-group. Turning right at the lights we then took a left turn to Weeton/North Rigton/Norwood towards Menwith Hill crossing the A59 to Dacre, taking a left turn up Dacre Lane climbing up the hill and descending down Nought Bank Road into Pateley Bridge for the 1st stop.

After refreshments including sampling the local Pork pies we were all ready for the 2nd part of the journey. Ian, Mike, Tony, and Graham left at this point. 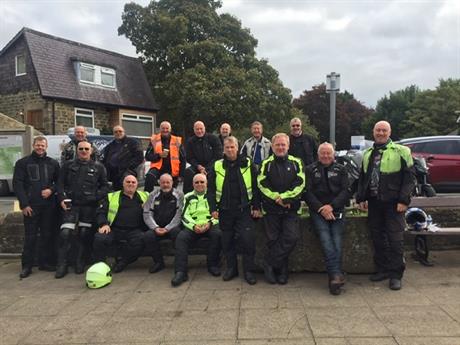 We took the road towards Greenhow Hill taking a left turn to Appletreewick to Burnsall were we all navigated safely by the Shire Horse & Cart Event that was creating some interest in the village. Heading towards Grassington we took a road towards Thorpe which goes to Cracoe on the B6265 which does not show as a through road on some route planners. We encountered some dog walkers along the way which were surprised to see me I think they got a bigger surprise by the time all riders passed them, don’t think they had seen as many bikes on this road!

Further on Myself and Adam behind me encountered a Classic Capri first hand coming the other way at speed, it looked like he was competing in a classic car time trial! Adam managed to get the drivers attention to inform him other bikers were following!

From Cracoe we then took the roads to Hetton/Winterburn/Airton onto the Malham Cove road which was busy with traffic in both directions also the weather closing in hampering the spectacular views, over the hills to Stainforth we travelled. Stopping at Stainforth for a short break we then set off on the smooth flowing roads towards Ribblesdale Via Duct and Hawes which were enjoyed by all.

Lunch stop was at the Wensleydale creamery coffee shop fortunately the queue for food was not too long until all 13 of us joined it! The customers behind us may have had a different view!

Six of us now lined up for the final part of the route so off we went over the popular Buttertubs pass to Muker. Just through Muker we followed a very slow obstacle a Motorhome. The driver clearly took preference to driving on the right had side of the road with no intent of giving way, we gracefully followed and as we turned right to Askrigg he appeared to speed up. The road took us back over the hills to Askrigg, enjoying spectacular scenery which is equally as enjoyable as Buttertubs if not more.

Due to timing a shorter version of the planned route was taken onto the very enjoyable roads via Castle Bolton/Redmire and Middleham to the final stop at Brymore.We all enjoyed our well earned Ice Cream to round off the day, prior to setting off home. Many thanks Chris for carrying out back marker duties and to everyone in taking part in the ride,I hope you all enjoyed it.

I managed to avoid any U turns but it may have been close once or twice, so I apologise for any late indicator signals if you were behind me at the time!