Posted on 04/11/21 |
4 x
Well was it wet then?
Well a bit, well quite a lot to be fair but only on the morning ;-)
4 of us squared up to the weather @ Squires, brave souls, or as Anne D would says loonies.
We set off for the Shed 30 caf near Kirkbymoorside, down to Sherburn and straight across and on one of the trusted routes over the bridge at Cawood, river definitely up from last week, over to Escrick, Elvington, Stamford Bridge, across the A64 up to Sherriff Hutton and Hovingham, home of the Worsleys don't you know.
Not hesitating to peruse the home of these toffs we progressed to Nunnington (an absolutely fab tapestry by Grayson Perry was loaned to the Hall last year) and skirted the village of Wombleton (no points for guessing what splendid TV heroes were named after it) and trudged into the dodgy bike park of the said caf where bacon butties (I've run out of sausages) were munched and teas were slurped.  While we were there Cedric called me from Manor and asked me were we were as he had been waiting for us to turn up for an hour.  Obviously he had only been given half the story of this ride :-(( 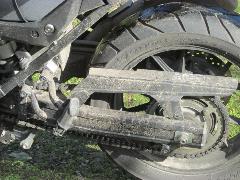 It has to be said that the whole of this route has wigglies galore but it was a leetle bit muddy ;-(

Back onto soggy bikes we battled on although the rain was slackening and a brighter sky was glimpsed in the distance.
Zooming into Helmsley we headed up the Stokesley TT, always a pleasure but hung a left down the steepening and yet more muddy/gravelly/brazilianly hills to Rievaulx Abbey avoiding the walkers and cyclist with consummate skill.

Of course the ride through these back lanes leads across the A19 on the absolutely must do road to the back of Northallerton, if you don't believe me just do it.

It was while we crossing this bit of country we realised the rain had indeed stopped and this was confirmed by a cloud formation called Stratocumulus the line of which clearly shows the redceeding 'storm', here is an example.
I decided that the best plan now would be to just follow the A684 now to get us to the Manor caf as soon as, not that it is a boring road at all.
Hey the roads were dry!  And although we had been keeping up a reasonable pace we pushed on and made even more progress, hee hee.
As we all know the swing out and to Manor from Leyburn is a brill run, very quick flowing bends.

When we arrived there were some bikes we thought we recognised and guess wot, a large figure leaned out of the door to the caf (yes it's back inside again!) with a highly trimmed head and shouted "get in quick the caf's closing in 10 mins"!
It was of course the friendly J Coe esq.

Well we high tailed it inside and ordered our grub from the ever friendly and accomodating Rachel and scoffed it soon as. 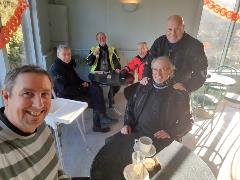 Surpise, surprise it turned out Brian's impromptu ride had rocked up @ Manor a little while before our group, excellent!

Here we are apart from Chris and Nige who had to leave the ride a bit ealier.

Great rides despite the early challenges, thanks to all who braved it