Posted on 18/11/21 |
2 x
Paul had selected Strawberry Fields for the start point of this ride and with mild mainly dry conditions forecast a total of sixteen bikes registered for the ride. A good turn out for a November ride.

Pete T carried out the briefing on Paul's behalf, this contained the news that the T&P stop had now moved to Hutton Le Hole and a final destination of Seaways and after the usual encouragement of bunching at junctions etc the group set off.

Paul followed a familiar route through Wheldrake, Elvington and Sutton Upon Derwent

before a difficult crossing of the A1079, after which Yapham, Meltonby and Bishop Wilton led us on to Garrowby Hill and a right turn up the A166.  A short scoot along here before turning left on the route to Leavening, and then on to Mook, Westow and Kirkham (of abbey fame) before reaching the A64 to turn left.  Almost immediately we then turned right to take on the familiar romp up to Castle Howard, always a nice road this one and after recent resurfacing it's better than ever.

Passing Castle Howard previous traffic hold ups had led to the group getting split up meaning Paul had to wait for riders at the turn to Coneysthorpe  which led to a bit of confusion as the first two to arrive thought he was marking the junction and promptly sailed passed him.  Paul now needing to pass them charged off leaving no mark at the junction, fortunately as it's good visibility from the straight road before the turn riders saw the turn and catastrophe was avoided.

Resuming the lead Paul then turned left down to Amotherby and on to another good road, the lovely twisty route up to the A170 and from here it was a quick blast on to Hutton le Hole.

After the stop a couple of riders departed for home and the rest of us set off for the second half, north out of Hutton Le Hole and then left down Lawna road to Gillamor.  A couple of switchbacks around the minor roads in this area before it became obvious we were headed for the ford at Kirkdale, but surprise surprise when we got there it was dry!

Crossing the A170 we headed on to Nunnington,  Hovingham, Terrington and Welburn before arriving at a tricky right turn on to the A64.  Pete's briefing came to the fore at this stage as good bunching was observed followed by swathes of bikes turning together into the gaps that appeared.

A brief spell on the dual carriageway led to us turning left back down to Kirkham (you know the one of Abbey fame) and then on to the Buttercrambe TT where a right turn took us on to Langton, Birdsall and eventually Wharrem Le Street.  Turning right here and over the top down to the roundabout and right again up through Fimber and on to Seaways for food.

Thanks Paul for an interesting and varied ride and Nigel for back marker duties.  Copty of the route below. 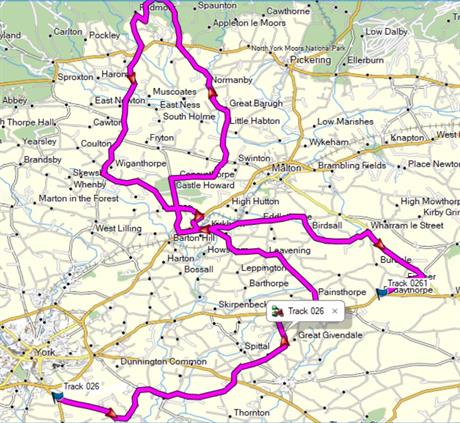