"Sorry I missed the Friday ride, I signed up for the Sat ride, the 1st of 2020; well how was it, weather held up and the temperature I'd say?"
Well John it was an absolutely brilliant ride led by the ever intrepid Mr Otter esq.  The weather was abfab especially at this time of the year, temp around 15degC, bit of a breeze but not a prob although it was a bit gustier over the tops before descending to Pateley.
"Any mud?"
Ah, well err.....yes there was a bit and big puddles and well you know, for example. 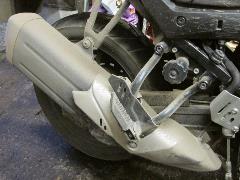 Anyway after the briefing which was delayed a bit as Squires wasn't opening until 10 and the odd call from nature needed to be answered it all started off OK, 13 out of the 14 registered rode out of Squires towards Sherburn but turning down St John's Lane and right through Staxton on to Tadcaster but right at the lights to Oxton and Bolton Percy, over the A64 and up to Tockwith and the A59.
We doglegged through Whixley and under instructions from Ian McNeill cruised past his house so he could wave at Margaret his wife, and some of us did the same. :-)
All this with excellent twistys, the road surface was surprisingly good but the odd mud patch, especially on bends was lurking to catch us out, but no dramas occurred.
At the briefing Chris mentioned we were going through Gt Ouseburn and then a loop round through the Dunsfords, upper and lower, and Ian had commented that we would 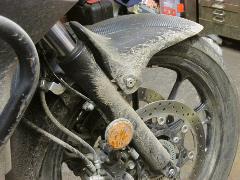 mostly encounter mud and horses, he was right about the mud, and there big puddles and annoyed local motorists but the horses seemed to have been replaced by dogs!
Trickling round the back of Plenty, a bit scary riding along so very close to the river and turning a right angle up a steep hill into the bike park, we came across Mike Vournas who had decided to meet up with us there.
The staff at Plenty were a bit challenged with such a large group turning up at the same time but we all had the tea and buns we needed eventually.  Mike and 3 of the team left us when we set off for the 2nd leg of the ride.
Setting off on pretty rural roads from Minskip towards Markington we joined the B6265 at Fellbeck which runs down into Pateley Bride, didn't stop for pork pies though. :-(
At the other end of the town we hung a right up Low Wath road along the side of Gouthwaite reservoir, oh yas!  This road with its insanely twisting and undulating route just has to be one of the great favourites of the area and it was additionally most gratifying to see that Gouthwaite seemed pretty much full, not a sight we've seen for a few years now and at the top end it was well into the marshlands on the outskirts of Ramsgill.  The next village is of course Lofthouse where we turned right up the exceedingly steep and tortured main street intriguely named Thrope Lane which becomes Trapping Hill as the real climb up and over the open Moor starts, what a view, clear as ought and horizons in abundance.
As we descended to run over the Leighton reservoir it looked as though it had filled up as well and to some extent it had but as we cruised along it, the steep banks were still somewhat in evidence so some improvement but still some to go.
The undulating and still pretty curvy road goes through the charming village of Fearby with its really wide green, not particularly typical of villages in this area, and we knew Masham was but a short hop away. 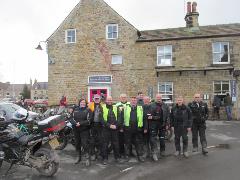 With the welcoming Masham Bordar House cafe and its 2 windows one for ordering and paying and the other for collection of the goodies; I had a bacon and sausage bap, a complete meal with a mug of Rosy Lee, luverly....
The team swigged and chomped with alacrity and then it was considered rude for some of us not to visit Brymoors for pud ;-) before heading for home with full tums and songs in our hearts, what a brill days ride and a perfect end to what has been let us say, an unusual season at the very least.
Thanks for leading the perfect season ending ride Chris, cheers to y'all and remember to keep the faith and grab the jab ;-)

Here’s the route including the home to Squires bit and the last homeward romp from Topcliffe!!