8 x T5-ers joined the Training team at Squire’s on a fine, bright but windy, Saturday morning, though the training team had a meeting, the T5-ers were going to heading out of the car park, just as soon as a tail end Charlie arrived.

A non starter, turned out to be Dave, surprisingly, his Ducati not wanting to join in the adventure, hopefully it’s nothing too demanding on the wallet.

The original hymn sheet had the A59 Cafe for the T&P, but, Fewston Farm Shop, was another option, and in hindsight I wish that I’d stuck with the original hymn.

The Creamery at Hawes remained as the final destination, with Brymor’s the obligatory homeward stop.

The pre ride brief boxed off, and Steve being good enough to volunteer for sweeping duties. Worth noting for future rides, that with other like minded motorcyclist coming out of the woodwork now that the temperature is getting into double figures,… it’s worth the sweeper having one of our distinctive orange vests, this helps avoid confusion to those marking a junction when the group opens up and other riders can/do intermingle.

A major log jam on the A64 westbound was apparent as we crossed over on our way into Taddy, which explained the steady flow of traffic heading towards Sherburn.

Onto the Roman Road, where a re-group gave me the opportunity to bulk out the timing of my route, as it wouldn’t have been the advertised 11/2hrs :-)

The remainder of the ride to the T&P went fairly, Arkendale, Scotton, Ripley, and a queue of traffic to Killinghall, we’re dispatch and, A59, onward to the Farm Shop

As we parked up, a very unfortunate happening occurred, due to the incline of the car park, and a fairly stiff breeze, two bikes ended up on the deck, nobody was hurt.

Two T5-ers headed off, as the balance of the group headed off to Hawes, across the A59, Greenhow Hill, Grassington, Kilnsey :-( , and at Kettlewell cut across to Asgarth then to Hawes taking the Long Shaw Road, which runs parallel to the A684. 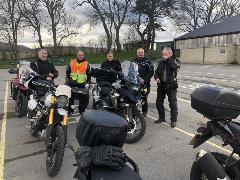 After Hawes it was homeward, stopping off at Brymor’s where Alan was kind enough to treat me to pudding, and it did hit the spot, very pleasant :-)

Chris was good enough to take the lead for our homeward leg as far as Helperby, where he and Pete went left, and Alan took up the lead, at a brisk pace for those destined for York.

Thank you to you all for attending, and hope that you all arrived home safely.

And look forward to seeing you at the next meeting point this coming Saturday, and the forecast does look quite good,… at the time of going to press.