The Easter Bank holiday Saturday ride had a very good turn out, 17 T5-ers assembled at Squires, and after the brief, a team photo, which is always a bonus as a ride can lose a rider or two for one reason or another.

With that I mind, Graham was good enough to check that some of the newer members were up to speed with our drop off system.

As it happened, Chris Otter did a fine job of keeping it all ship shape as back marker ( thank you Chris).

The routing to both locations was with the bank holiday traffic in mind, but as it happened it proved to be relatively quiet, the usual sprinkling of cyclists and horses, and of course dog walkers.

The routing to Fewston Farm Shop was pretty straightforward, Saxton, Towton, Tadcaster, Wighill Lane, Roman road to Cattal across the A59 to Whixley, and a short stretch on the Boroughbridge road before turning off for, Arkendale, Scotton, turning towards Killinghall before Ripley, crossing over the A59 to take the road past the the Army Foundation College ( quite misty /chilly along this stretch of road), and onto the Farm shop for a well earned T&P, and all 17 T5-ers accounted for.

Suitably, refreshed the 11 T5-ers headed off for Hawes, the balance of riders having other commitments, ….even a game of cricket 🏏

Again, a route which is fairly well used, but, other like minded motorcycle groups caused a tad bit of confusion at Grassington, and a surprise in store for myself to meet one T5-er coming from the direction of Kilnsey Park at the triangle at Kilnsey.

All was not lost, and we continued to Kettlewell taking in those sharp climbing hairpins, and onto Melmerby, Aysgarth, Askrigg and Hawes.

Very busy in Hawes as we passed through to the Creamery which I expected to be busy, wasn’t to bad, as we managed to liberate one of those long benches outside, and enjoy the fine dining :-)…. unfortunately, one of T5-er didn’t make it to Hawes, but reported in that he was fine, thankfully.

The 7 remaining T5-ers set off for Brymor’s for pudding using that road that passes Castle Bolton to Wensley, and onward to Jervaulx ( Brymor’s).

The outside unit had all those tempting flavours, but who needs tempting?

Chris Otter was good enough to take the lead for the homeward route ( thank you again Chris), …. and, looking forward to the SatNav tutorial this coming Thursday at Squires.

Thank you to all those that attended, and would like to think that it an okay way to spend a Saturday for you guy’s too :-) 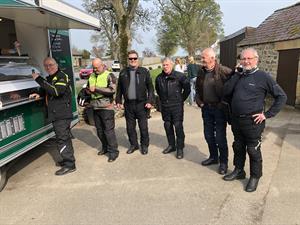 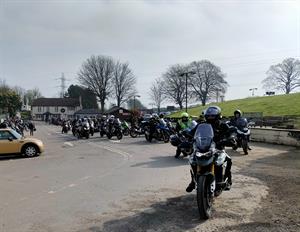 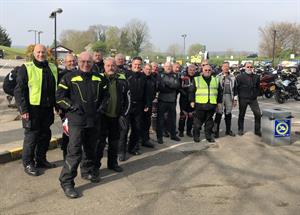