Posted on 02/05/22 |
3 x
Although quite chilly at 9.45am Saturday morning at Squires when the ride's briefing took place, the sun was shining at it looked a glorious biking day.  The briefing consisted of a short overview of the route along with the usual urging around marking and junctions after which a couple of late comers arrived and shortly afterwards 15 bikes set off.

Turning right out of Squires the usual route to Tadcaster was followed after which a break from tradition saw the group ride through Tadcaster and briefly touch the A64 before taking the left turn at the end of the slip road.  Winding our way across country I was distracted by a couple of working tractors causing me to miss a left turn.  Fortunately I managed to signal the others before they passed the turn so it was only me who had to U turn!  Not sure if that counts as a U turn?  On  towards Cattal we were caught at the level crossing at the other side.  Always a slow operation this crossing but after not too long a wait it was down to the A59 where we turned left and then first right to pass through Whixley and on to the rickety bridge at Aldwark.

Once the other side of the river it was a meander on through Flawith, Tholthorpe and 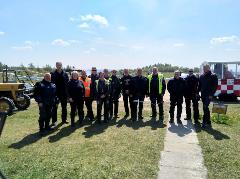 Raskelf before crossing the A19 heading to Kilburn via Coxwold. The white horse could clearly be seen at this point, basking in the sunshine.   After this it was a quick dash up White Horse Bank and into the car park at the Yorkshire Gliding Club where it seemed every glider was out of the hangers, awaiting launch.

The welcome at the gliding club was as warm as ever including the rollicking for not ringing in advance to warn of 15 bikers turning up and catching them by surprise.  You have to play by the rules at the gliding club otherwise a certain lady will let you know you didn't!

Suitably refreshed and with just one retirement at this stage we set off towards the A170 for the second half of the trip, lunch in Lealholm.  Turning right on to the A170 the next left took us down into the valley and the resplendent Rievaulx Abbey.  Climbing up out of the valley a tight left turn at the top put us on the "Helmsley TT" for a glorious run up to the right turn to Ingleby Greenhow.   From here travelling through Kildale and on towards Castleton, turning left towards Dibble Bridge to avoid the Ford in the bottom of the valley.

It was just before Castleton that we came across the ubiquitous "Road Closed" sign, but as we bikers all know the road is only closed when there's nowhere left for the tyres to run.  When we eventually reached it the closure was only half way across the road with a gap too narrow for cars but easy for the bike.  On then through Castleton, Danby and Houlsyke before dropping down the hill into Lealholm and the Shepherd's Hall.  The Shepherd's Hall 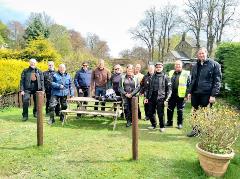 closed last year but has reopened under new management.  It was glorious sat out in the garden in now 16C  and the food from the "all you can eat buffet" (those who were there will know what I mean) was very good.  The new owner did say though that if planning to turn up with a large group to ring in advance (01947 897011).

After a leisurely lunch the offer of a ride down to Fimber Cafe was taken up by all but one albeit some were peeling off at suitable points on the way.  Climbing out of Lealholm we took a left to Glaisdale and on to Egton Bridge where we rode on to Wheeldale and down to Pickering.  Through Pickering and down to the A64 where we turned left on to the dual carriageway then taking the first exit off.  We then entered the first full U turn of the day when a stray point on the route (my fault) turned us left on  to a completely wrong road.  Turning back on ourselves left just a run into Norton and back out again over to North Grimston, Wharrem Le Street and down the hill to Fimber where we enjoyed tea and cake in still glorious sunshine.

Thanks to everyone who turned out for the ride and to Chris Hoare for excellent Back Marker duties.  Copy of the route below. 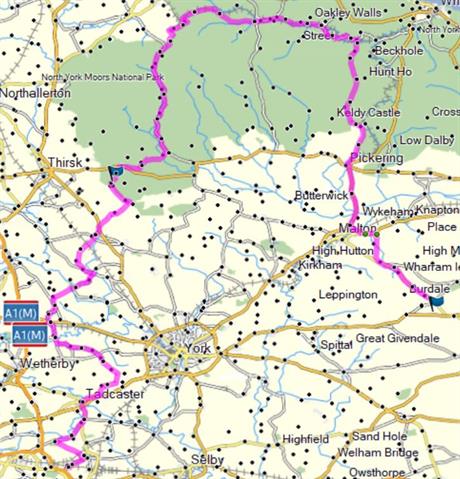