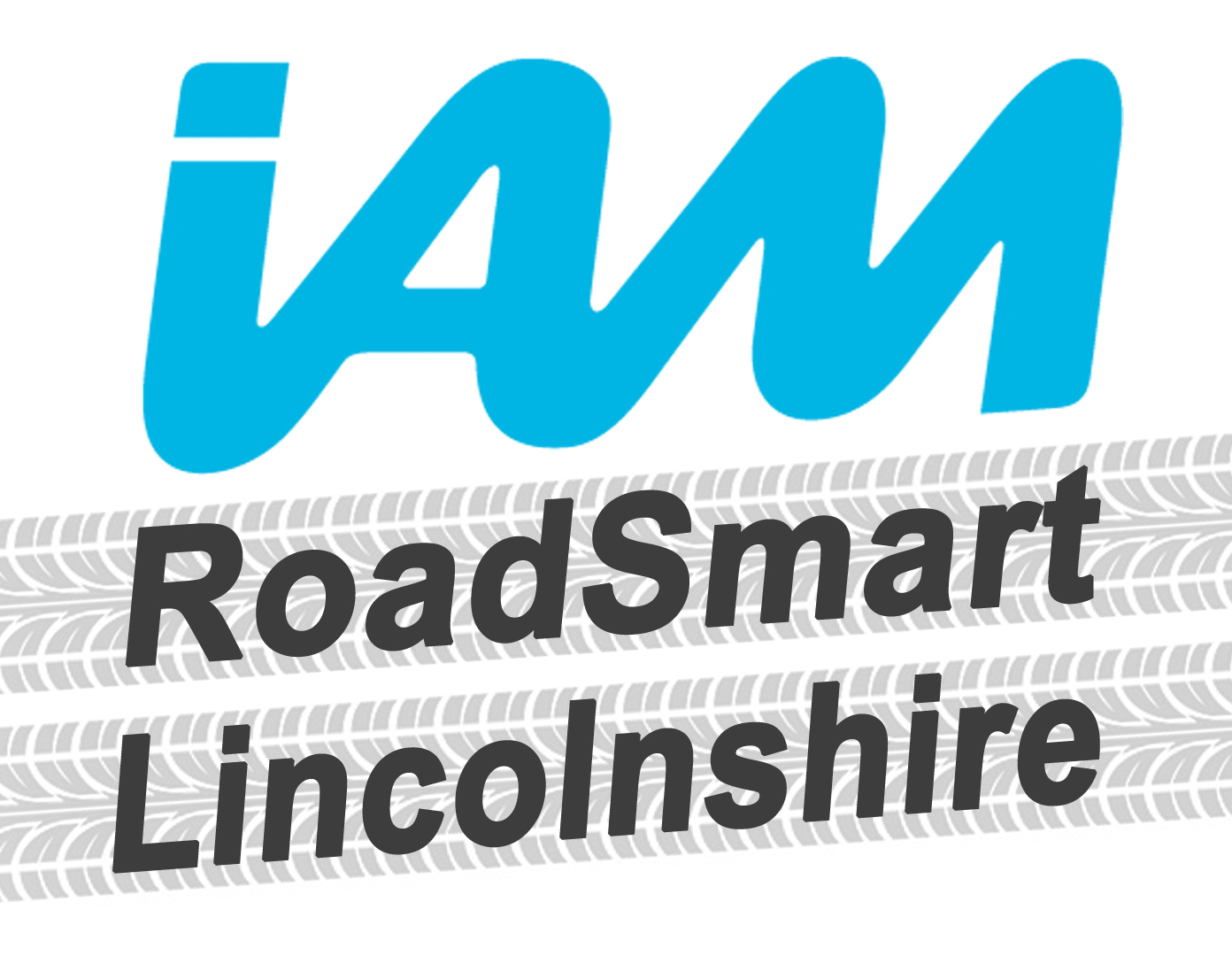 I can’t be alone in wondering: How do we prevent drivers of today and tomorrow using their mobile whilst driving?

I use my mobile phone whilst driving! That’s what 51% of drivers who completed our Twitter survey, have told us. A survey earlier in the year by the RAC found 31% admitted to using a phone when driving – that’s compared with just 8% two years earlier.

Clearly there’s something to discuss. I have written this simply with the facts, but where I have given my opinions, I should say that these are my own and not necessarily shared by IAM RoadSmart or Lincoln IAM. There’s a comments section at the end, so please let me know your view. 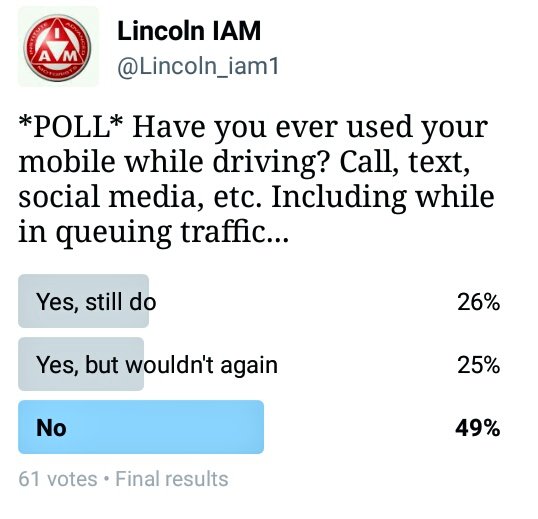 I wasn’t at all surprised that 51% of drivers had used their phone behind the wheel, or that a further 26% carry on doing so. I doubt you are either. Anyone who drives regularly will find it’s quite normal to spot a driver using their phone – and not only in the conventional ways we’re used to. I drive around 15,000 miles a year, generally around Lincolnshire, and I’d say I spot around four drivers per journey using their mobile when driving.

Phones are now ‘smarter’, so it’s not only calls in the car; it’s texts, WhatsApp, iMessage, Facebook, Twitter, Instagram, Snapchat, Tinder, taking a photo, recording a video, answering emails, looking at your diary, betting apps, map apps, Googling the latest rugby result and while you’re playing Pokémon Go a Snorlax has just popped up on the traffic lights while they’re on red and you’ve got to catch him before they go green! The list of things you can do on your mobile goes on and on and on and on and… I think you get my point!

Studies show your reaction time increases by up to 35% when driving using a mobile. More than one person a day was killed or injured by a driver using a mobile phone in 2015 and that’s one too many as far as I’m concerned. How can you make a difference? Well, you have to take individual responsibility.

Using a phone or similar device whilst driving on a public road1 has been illegal since December 2003. The rules are the same if stopped at traffic lights or in queuing traffic and it’s also illegal to use a handheld device when supervising a learner driver or rider. For prosecution purposes, a handheld is something that must be held at some point during the course of making/receiving call or performing any other interactive functions, i.e. texting or using social media. Interestingly, a recent case in England ruled that using a dictaphone whilst driving wasn’t an offence under this law (don’t think I’d recommend it though!). 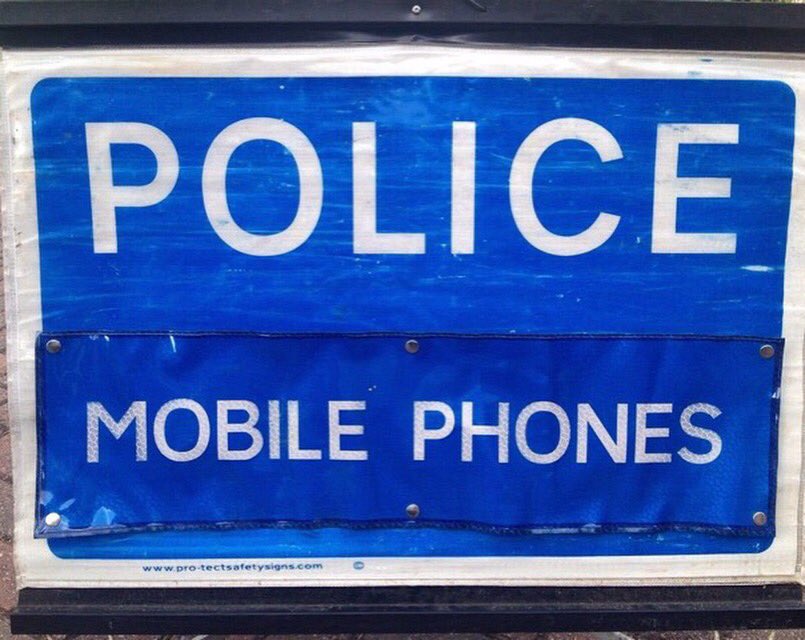 It’s worth remember it is lawful for someone to use a mobile phone whilst driving if they are using it to call the police, fire, ambulance or other emergency service on 112 or 999, they are acting in response to a genuine emergency and it is unsafe or impracticable for them to cease driving in order to make the call.

If you’re caught using one, you can be issued with three points on your licence and a £100 fine. Your case could also go to court (generally if you have nine points on your licence already) and you could be disqualified from driving and receive a fine of up to £1,000 (£2,500 for buses or goods vehicles). For first time offences, the police have the discretion to offer drivers a ‘What’s Driving Us?’ educational course as an alternative to points. The course costs £90.

The government have recently announced tougher rules which will see drivers get six points on their licence and a £200 fine. Newly qualified drivers could be made to retake their tests if they are caught. The new rules, which will apply to England, Scotland and Wales, could also see more experienced drivers going to court if they offend twice, and facing possible fines of up to £1,000 and at least a six-month driving ban. The tougher penalties will be accompanied by a high-profile government Think! campaign. This will certainly be a bigger deterrent.

I asked Lincolnshire Police Chief Inspector, Phil Vickers, about the changes. He said: “we welcome the increase in penalty for using a mobile phone whilst driving, though inevitably it relies on there being Officers to enforce it.”

In terms of actual prosecutions, the number of motorists being caught using a phone behind the wheel by police has fallen by 47% since 2011/12 (178,000 in 2011/12 compared to 95,000 in 2015/16). Many police forces believe that this reflects budget cuts and there being fewer officers to police the roads rather than there being fewer offences committed.

1 The definition of public road has thrown up some interesting legal points in past cases, car parks for example have been classed as this.

To give some general background on the statistics, the figures are taken from the Department for Transport (Dft) 2015 accident statistics which tell us that in 2015, there were 108,211 injury accidents. It’s worth noting that only injury accidents are recorded, so the figures don’t take into account the many non-injury ‘bumps’ which take place each day. The accident information is then broken down into three categories of severity:

That’s four people a day who died on our roads in 2015 and 47 receiving a life changing injury. Those people are just me, you and our families – it makes me think!

When the police attend an accident, they complete a STATS19 form, in which they choose from 78 ‘contributory factors’ they believe have contributed to the cause. These fall into nine categories, which are:

Under ‘Impairment or distraction’ comes ‘Driver using mobile phone’. The 2015 statistics for this tell us that 440 accidents were caused by that category. Now I found that surprising, to be honest. That’s only 0.4% of all accidents in 2015 and broken down into severity it works out at:

Given the attention use of mobiles at the wheel gets in police campaigns and in the press I expected it to be higher. So why so low? Again, I asked CI Phil Vickers, who said “the figures quoted are from the forms completed at the time an Officer first attends an accident, not after investigation. For example, witnesses and technical evidence”.

Let’s face it, people don’t always tell the exact truth to start with, do they? If you rear end a car in traffic whilst updating your Facebook status and the police attend and ask: “how did this happen then?”

“Well I was looking up at the lights changing and didn’t see the cars in front stop…”. It’s human nature, I’m afraid?

If the statistics and contributory factors behind accidents interests you, I’d recommend a book I recently read called “How Not to Crash” by Reg Local (available on Amazon). It goes into more detail and gives some useful advice on avoiding becoming part of the statistics.

IAM RoadSmart gives several recommendations with education being at the forefront. Other recommendations include higher fines/points and the creation of technology to stop phones working once in car.

Research backed by the IAM has demonstrated that a driver cannot safely control a car and make or take calls at the same time. Texting or use of a smartphone whilst driving increases reaction time by up to 35%. Using a phone causes physical, visual, mental and auditory distractions, leading to significantly slower reaction times. IAM RoadSmart research shows it can be more distracting than driving with alcohol or cannabis in your system.

Neil Greig, IAM director of policy and research said: “for many, smartphone use has become an addiction that we can only start to cure through some form of therapy. The IAM does not object to tougher penalties but we do believe that the real deterrent is fear of being caught. That fear can only be increased by increasing the numbers of traffic police on our roads.”

The IAM found that 9% of drivers surveyed admitted taking a selfie whilst driving within the previous month – a figure that increases to 19% of 25-35 year olds. The survey also discovered 8% of drivers admitted to driving while using a video-calling application such as FaceTime and Skype to make and receive video calls, rising to 16% among 18 to 24 year olds.

Neil added: “Technology has caused this issue and technology offers one route towards reducing the distraction effect of mobile phone use. It will not be easy to retrofit many of these solutions but the IAM is supportive of trials and pilots to show whether automatically switching off phones when moving can deliver safer roads.”

You can view IAM RoadSmart’s full policy on Mobile Phones and Driving here.

At the end of the day, we’re all responsible for our own actions and that includes understanding why using a phone is so dangerous. It’s your responsibility to manage the distraction of your mobile (amongst other things!) whist driving, I can’t really make it any clearer than that. Turn it off and put it out of reach – it really is that simple. Or at least it should be…

Our survey shows that over half of drivers have used their phones in car and a quarter still use them on a regular basis. We’re entering a generation where technology is a necessity as great as water and electricity. Smartphone use has been labelled an addiction. I can’t be alone in wondering how can we prevent drivers of today and the future using their mobiles – that’s before we think about the practicality of enforcing it!

There’s a huge stigma around drink/drug driving and quite rightly so, but it doesn’t seem to exist with mobiles. The police undertaking educational campaigns, such as #FATAL4 (seatbelts, mobiles, speed and drink/drugs) is a positive. Future media campaigns planned in 2017 will also help.

I have to say that the more I think about it the world we live in, the more I believe the driver of today and tomorrow will crave the need to use their phones whilst driving. Perhaps that’s where the autonomous car will assist in that regard.

I think it’s inevitable people will continue to use their phones when driving. I also believe it will increase dramatically over the next few years. Budget cuts in the police will make it harder to enforce whilst there isn’t enough is done to educate – probably because the statistics don’t back the severity?

If you currently use your phone whilst driving, I challenge you to make a change.

Focus purely on driving, doing it well and really enjoying it. Be ‘proactive’: Making good, early observations and plans so you avoid just ‘reacting’ when something happens – your phone needs to be out of sight and sound to do this.

What if the car in front brakes suddenly? What if someone walks out in front of you? There’s a tendency for the thought of “Nah, I’m alright that doesn’t happen to me mate!” in the back of our minds. Well, all I’ll say on that is that it happened to 440 drivers just like you and I last year. There’s only so many times you’ll say “phew, that was bloody lucky!” before the inevitable does happen.

Autonomous car will be great for road safety and for the driver of tomorrow. If anyone’s seen the film, iRobot, you’ll know Will Smith’s character cruises along in his Audi using his laptop and phone while the car sorts itself out – that’s definitely the future.

I enjoy driving, try my best to do it well and develop when I make mistakes. I drive with my phone on silent, generally in my coat on the back seat – I hope you choose to do the same.

Let’s all play a massive part in making the difference. Turn it off and put it out of reach!