I’ve now had my first observed ride as part of my IAM RoadSmart course and I’ve got to say it was really good.

I was apprehensive before I met up with my observer, Ian Souter, about what to expect.

Would my riding be a complete mess because I was nervous? Would I do something really silly? (This was entirely possible!) Basically I was overthinking it.

When I met Ian, we just had a general chit chat to start with and he really put me at ease. Ian then explained to me what I should expect from the ride.

During the course we would work on different areas using the system at the core of advanced riding known as IPSGA :

'The IAM describe the Information part as ‘Gather and process relevant information in order to make accurate decisions about riding. Communication is also important as clearly conveying intentions allows for road space to be shared more effectively with other users’.

We would begin the session, Ian said, by riding to a lay-by in Winslow which was about half an hour away where we would park up and have a chat.

To start with I was very conscious of Ian behind me but very soon, although I knew he was there, I kind of forgot I was being observed and started to relax and really enjoy the ride. There were good roads, the sun was shining and I was riding my bike – perfect.

We pulled into said layby and parked up. Ian explained that there are three aspects to effectively gathering information and communicating with other road users:

The layby we had stopped in had a great view of the road ahead of us and behind. Looking behind Ian asked what I could see. There was a left hand bend which had two lots of chevrons just before the bend. I could just see a right hand junction ahead and when I looked further I could see the telegraph poles which I assumed followed the road off this junction.

Ian explained that where there are chevrons this is because in the past people have come off the road, perhaps due to misreading the corner. So, the local council have come along and put signs up to help people read the corner better and hopefully prevent more accidents. There were solid white lines on the road and ‘SLOW’ was painted in both directions on the road also.

Ian explained that when we are riding we should be looking and taking in what is near, far, wide and behind us.

It is important to take in as much information as we can to give us the best possible chance of reacting, if necessary, and keeping ourselves and other road users safe.

It made me think that when riding I don’t realise just how much information I am processing and automatically adjusting my riding, position, braking etc. It has made me think more about what I am doing and how I am doing it.

Back on the bikes we rode to a pub where we would talk about the second part of IPSGA: Position.

The IAM describe the Position part as:

‘Positioning a motorcycle accurately on the road reduces the risk of collision. However the ideal position will vary according to specific circumstances such as road layout, surface and traffic conditions’.

We parked the bikes and found two empty car parking spaces which were side by side. I had to imagine they were two lanes of a road and they had the numbers one to six going across them, kinda like this:

Sorry guys, you really will have to use your imagination with my drawing skills!!!

Ian asked me which ‘number’ I usually ride along on on a straight road, I said normally 3 if there was no traffic coming the other way. If there was traffic I would move towards two but generally I try to keep off of two and that’s normally where the crap is in the middle of the road.

If going round a right hand bend, position 1; a left hand bend position 3 although Ian said this should possibly be position 2 if there’s something coming the other way that is tight to the middle of the road!

We should be thinking about our position on the road and we should be positioning ourselves for safety and advantage. We should never compensate our safety for advantage.

We should be at least two seconds behind the car in front to allow us time to respond if the vehicle slows down.

This also allows us to get a better view for an overtake. If we are following a larger vehicle we should allow more time behind. As a general rule Ian said we want to be able to see the rear tyres of the car in front and some tarmac. 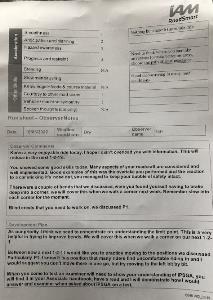 All too soon our session for this week had come to an end. After each session Ian would be sending me a ‘Run Sheet’ which logs the level at which Ian thinks I am at, my progress and a development plan.To the left is my session sheet.

I have to say that I really enjoyed my observed ride today. I was pleased with how it went and that after my initial nervousness at the beginning, I felt happy and confident being observed.


I find it really interesting listening to Ian explain how/why/what/when in relation to my riding and what I can do to improve.On my ride home by myself it made me think more about what I am doing and the things that I can/should do to keep me safer and make me a better rider.

Looking forward to the next observed session!