I met my IAM observer, Ian Souter, for my second observed ride of the Advanced Rider Course at Ashridge. The sun was shining and we were in for a beautiful afternoon. I had no nerves today and was actually looking forward to today’s session. 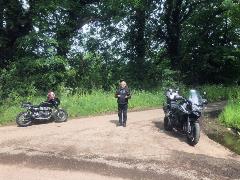 After a general chit chat, Ian explained what we would be doing this session and what I should expect. Today we would be covering the Position part of the syllabus. The system at the core of advanced riding is known as IPSGA : Information, Position, Speed, Gear and Acceleration.

The IAM describe the Position part as ‘Positioning a motorcycle accurately on the road reduces the risk of a collision. However, the ideal position will vary according to specific circumstances, such as road layout, surface and traffic conditions’.

We touched on Position in the last session but we would be looking at it in more detail today. We would be riding to a stretch of road about 20 minutes away where we could park up and then ‘walk the road’ to look at a bend.

Before we set off, Ian gave me another acronym to think about before each ride:

Ian led to start with so I could see the positions he rides on the road and when/why he moves positions. Riding for safety and advantage. About ten minutes in, Ian waved me past and I led for a while.

We pulled into a farm entrance and parked up. I’ve gotta say the last bit of road to this point was not nice, it was a narrow road, at some points only one car wide, very pot holey and some of the edges of the road were falling away making you really want to keep away from the inside – not good when there’s traffic coming the other way.

So having parked up, we walked down the road a bit and looked back to where we had parked up. The road bends round to right.

Ian explained that the second most common cause of an accident on the roads are corners.

Going back to what we covered last week - there are three aspects to effectively gathering information and communicating with other road users:

So looking down the road to this bend, we need to look at different things:

We should not compromise our safety when positioning for a bend and we should never compensate our safety for advantage. Other road users or the condition of the road can affect which position we choose either going into the bend or coming out of it.

Standing looking at the bend and talking about what I could see, what my thoughts were as to where I thought I should be positioning the bike was really making me think more about my surroundings. It made me realise the amount of information we take in and are processing whilst riding/driving without really thinking about it.

Approaching the corner, it is important to gather all the information we can, position the bike right, adjust our speed and gear if necessary and then we can accelerate out of the corner. By doing this we can achieve going round a corner smoothly.

Okay so that’s the theory, now was the time to put it into practice. Back to the bikes.

I set off in front with Ian following me. By consciously thinking about the corners as I was approaching them and putting into practice what we had just talked about, I could feel my cornering was getting smoother. I’ve always had a ‘thing’ about cornering on my bike and most of the time it is fine but every now and again a bend will make me tense up and slightly brake in the corner!

I should probably give you a bit of background here. Before I got my bike licence, I used to compete in off road motorsport for many years in a purpose built racer.

I was racing one day and the course went out of one field into the next through a gate and then you had to do a sharp ninety left and continue straight. I had been going through the gate, drifting the back end out and then power on for some laps and it was on the penultimate lap that things went a bit awry. I had the back end out nicely drifting round and just as I had put the power on, I caught a rut and the racer flipped over and I ended up doing two 360 degree rolls ending up back on its wheels.

Now my co-driver and myself were okay which was the main thing even though the roll cage was now down by our ears and the windscreen was in our laps. The engine was still running so I kicked out the windscreen and continued racing back to the finish line and then into the pits. I am pleased to say that the roll itself only cost me 17 seconds but the scrutineer did not join with me in my elation.

Apparently, I should not have continued as the car was in no shape to have been driven from a safety point of view but when the adrenaline has kicked in and the red mist has descended once the visor goes down, you do not see it quite that way! It took 6 months to rebuild!

For about eighteen months/two years after this incident, I found going round a left hand bend in my car hard and could not get away from the feeling that I was going to roll over again but it did get better and the car, I am pleased to say, did not roll over. 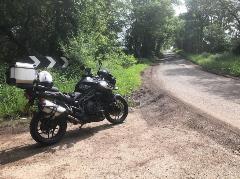 When I got my first big bike this problem reared its head again, it has now almost gone but it is still there in the background occasionally.

After about twenty minutes we pulled over and had another chit chat with Ian giving me some pointers before we set off again back to Ashridge.

By the time we got back I felt that my cornering had got smoother and I was really happy with how I felt that session had gone. I just had to hope Ian was of the same opinion!

Looking forward to the next observed session where I’m told cake should make an appearance!