Nothing says ‘you’ve just arrived in a foreign land’ better than that waft of intriguing aromas as you step off the plane. I recently returned from a trip to Cuba, where the country’s signature aromatics immediately made their presence felt at Havana airport, where the humid air carried with it a cocktail of dry grasslands, cigar smoke and petrol fumes.

I’m just about old enough to remember a time before catalytic converters, when the smell of vehicle exhaust was entirely familiar in UK cities, and the buzz of a small motorcycle was invariably accompanied by the strangely palatable smell of burning two-stroke oil. Cuba is still there. Although traffic is nowhere near UK levels, the streets of Havana and other Cuban cities tend to feel quite polluted, but the smoky air feels integral to the national ambience: always evocative of some bygone era, and somehow appropriate for the land of Cohibas.

You’ll have heard about the old American cars. Up until the 1950s Cubans bought thousands of those ostentatious, chrome-laden beasts from their near neighbour. In 1960 following Fidel Castro’s revolution, the USA’s trade embargo stopped imports overnight, both of the cars themselves and the means to maintain them, necessitating a ‘make do and mend’ approach to motoring. 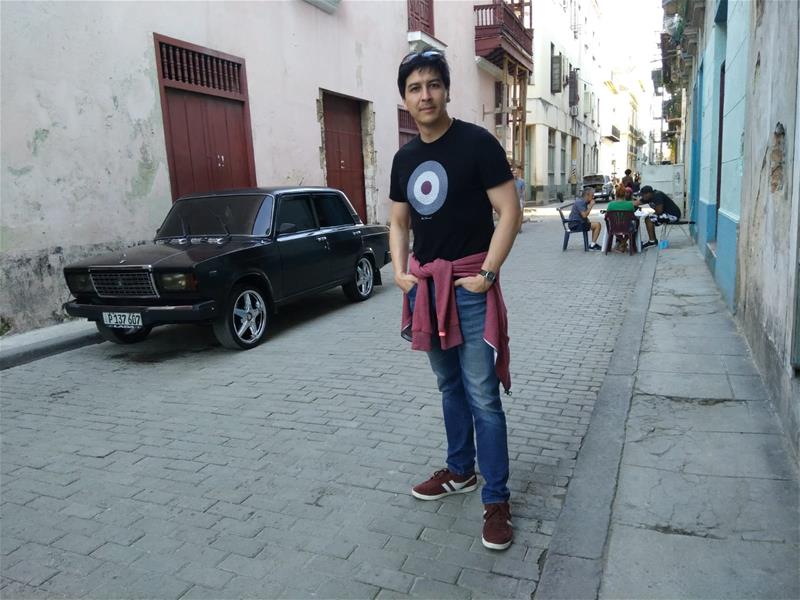 Many of the American cars now in service as tourist taxis have been remarkably well kept or meticulously restored. However, get up close and personal with the majority of them and you’ll notice bodged bodywork, tractor-like engine noise and other evidence of 60 years of toil. My first couple of taxi rides were in mid-50s Chevrolets, accessorised with modern alloy wheels and striped vinyl upholstery and, oddly, some Ford badges. All enhancements were purely cosmetic: both cars were slow, incredibly noisy, and gave off a distinct whiff of burnt engine oil. Even so, those cars made riding through Havana’s crumbling colonial architecture feel rather glamorous.

Not so glamorous, but no less important are the myriad Ladas, Moskvitches and other Soviet cars of the 1970 and beyond. Castro’s alliance with Russia saw huge numbers of these compact workhorses arrive in Cuba, and they provide a fitting counterpoint to the blingy behemoths from before; their utilitarian styling saying ‘we don’t look like much, but we’ve got this’. Those boxy Bolsheviks are basic but robust. One of the taxis was a circa-1980 Lada whose dented doors, dysfunctional dials and dodgy dashboard denoted decades of drudgery. To me it looked cool, the engine ran sweetly and of course, the exhaust smelled fabulous.

Old eastern-bloc motors have a reputation for being able to run on anything flammable, which is just as well considering that Cuba’s basic banger-grade fuel is 83 RON. That’s the Research Octane Number, not the Spanish for ‘rum’, although Cubans do like to put rum in everything so maybe they slosh a bit of Havana Club in the fuel tank for extra oomph?

The 1990s brought the collapse of the Soviet empire and recession-hit Cuba bought in very few cars during that period. The Argentina-assembled Peugeot 405 seems to have been the favourite for bolstering the nation’s taxi fleet, and many remarkably tidy examples remain in use. My favourite taxi of the holiday was a Fiat Tipo of similar vintage. Inside, it smelled like a working men’s club full of old plimsolls, and had threadbare blue velour interior trim, and an appropriately 1990’s pop playlist pumping out of puny speakers. The gear stick flopped about as though it was in neutral irrespective of the selected gear. In the UK, this car would have been junked 20 years ago, but in Cuba it’s still earning its keep.

On that note, I ought to talk a bit about Cuban road safety: it’s not great. The shabby vehicles don’t help matters, and decades of austerity have allowed the roads to fall into extreme disrepair too. Cuba really does have a worse pothole problem than the UK. There are very few visible road markings, and those that are visible are routinely ignored by drivers, who simply plot a meandering course between the craters. Despite the low traffic levels, the threat of head-on collisions always feels apparent, as vehicles jostle to occupy the most intact section of road.

The chaos doesn’t appear to faze anyone, or provoke any noticeable aggression between road users, who share the available space with abandon. Cyclists, horse riders, farm vehicles, ‘bicitaxis’ and other slow or vulnerable categories are warned of an impending overtake with a stab of the horn. They generally acknowledge with a casual wave, or by moving over a few inches, provided there isn’t some roadside hazard such as a ditch, a hitchhiker, or a stray dog asleep in the gutter. Like everything in Cuba, the people make it make it work even when it looks like it shouldn’t.

Cuba’s growing tourism industry is bringing increasing numbers of international visitors, investment, wealth and more modern vehicles, from privately-owned Peugeots to Hyundai hire cars. Most are Chinese-built taxis though, and I had the opportunity to ride in a Geely Emgrand and also a BYD F3: simple workhorses by European standards, destined to become Cuba’s next generation of long-serving beasts of burden. And they have rear seatbelts, which is progress.

Another sign of progress: electric scooters. These are a common sight in the cities and look to be overtaking petrol mopeds in popularity. Despite their gaudy plastic bodywork and ‘LITHIUM’ decals, they’re quite basic underneath – you can see they’re powered by traditional car batteries – but it’s easy to understand why they’re finding a niche in Cuba. They are simple, require little maintenance, and must be cheap to buy and run. They may not have the olfactory appeal of an old two-stroke MZ, but not everything has to give off a smoky aroma, even in Cuba.

Cuba’s anachronistic motoring landscape is in itself one of the country’s major tourist attractions and well worth experiencing. The driver behaviour and scant safety standards are a little nerve wracking at first, but once you get used to them you can sit back, relax and savour the sights, sounds and smells while you still can.