Filtering Safely on a Motorcycle

Filtering is the act of overtaking slow moving or stationary traffic by travelling between lanes and it’s completely legal if it is done safely. Richard Gladman, Head of Driving and Riding Standards at IAM RoadSmart, is on hand to give his expert advice to filtering safely and helping all road users to know the rules around filtering.

There are lots of different names for filtering, including lane-splitting and white-lining, but what we can all agree on is the main reason why motorcyclists do it – it’s to avoid congestion.

One of the many benefits of riding motorcycles is the fact that you can avoid congestion on two wheels much easier than you can on four, and that’s thanks for filtering.

All road users should be familiar with the Highway Code, and under Rules for Motorcyclists, Rule 88 states, ‘Manoeuvring: You should be aware of what is behind and to the sides before manoeuvring. Look behind you; use mirrors if they are fitted. When in traffic queues look out for pedestrians crossing between vehicles and vehicles emerging from junctions or changing lanes. Position yourself so that drivers in front can see you in their mirrors. Additionally, when filtering in slow-moving traffic, take care and keep your speed low.’

Then in Rule 160, where the advice is aimed more at other drivers, it clarifies this with, ‘Once moving, you should be aware of other road users, especially cycles and motorcycles who may be filtering through the traffic. These are more difficult to see than larger vehicles and their riders are particularly vulnerable.’

So, it’s clear that the Highway Code has specific provisions that cover filtering on UK roads. 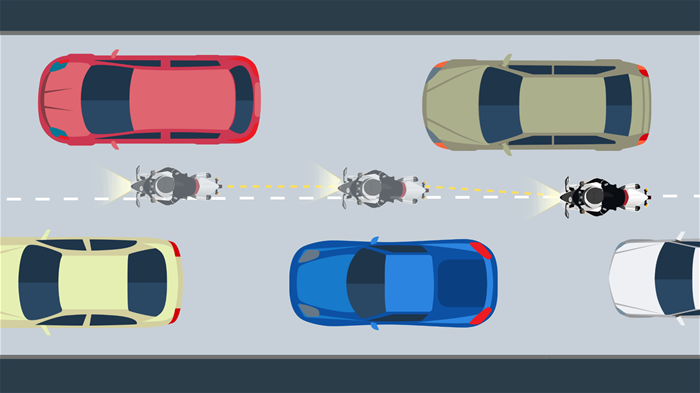 How can I filter safely?

When done correctly filtering is something that is safe – with the bonus of saving you time. There is no point filtering through traffic to cut down your journey time if you’re putting your life in danger.

Staying safe whilst filtering is key so make sure you assess the risks. Keep calm and don’t feel pressured to filter at a certain speed. Keeping your speed down not only allows you more time to brake if any unexpected event unfolds, but it also means you have more time to assess what’s going on around you. Remember, you know the width of your motorcycle and only you can make those decisions.

When filtering it’s also worth being aware of vehicles leaving big gaps in front of them, they may be just slow on the uptake, or there could be a junction, pedestrians, cyclists, or another driver about to emerge and fill the gap. Be careful of junctions offside too, a late decision by a driver to turn out of the traffic may be your downfall.

Keep the speed difference between you and the other traffic sensible and if traffic starts flowing again be ready to safely join the flow.

If bikers remain vigilant and careful, filtering can be safe. All bikers are legally free to filter, however, this should be done with caution, awareness, and consideration to traffic rules. Do not cross solid lines to filter unless an exemption applies

Although filtering has way more pros than cons, there are a few down-sides to watch out for. One of them being blind spots – somewhere no motorcyclist wants to find themselves.

Moving past multiple vehicles on a bike will mean you’re constantly moving in and out of drivers’ blind spots. Maintaining a comfortable distance between vehicles is important here and consider drivers who may not have seen you.

What happens if I have a crash whilst filtering?

Your insurer will almost certainly obtain a police report and associated witness statements before they decide who was to blame and in what proportions. Each case turns on its own facts as the starting point to establish what is known as ‘primary’ liability which is deciding who was primarily to blame. It’s then for that driver to prove that you have some blame.

Richard says: “Filtering is part of the appeal of travelling by motorcycle, when done safely with a good awareness of other traffic it is an efficient way to make your journey. Be aware of pedestrians if in a built-up area, stationary traffic is inviting for a quick bolt across a road without ever looking for a motorcycle that may still be moving. As the speed of the traffic increases it may be that your filtering becomes inappropriate overtaking, keep it sensible to stay safe.”