Older Drivers fit, healthy and determined to keep driving for at least the next 12 years or more

New research from IAM RoadSmart, the UK’s largest independent road safety charity, reveals that motorists over the age of 60 intend to drive for as long as they are safe to do so, and that the average age they would consider giving up their licence is 82.

With a grant from the Department for Transport, IAM RoadSmart recruited Dr Carol Hawley from the University of Warwick to produce an update on Keeping Older Drivers Safe and Mobile: A Survey of Older Drivers, first published in 2015.

The new report details the findings from surveying over 3,000 respondents aged 60 plus from across the UK, and highlights that older drivers value their cars to maintain independence and want to stay mobile for as long as possible while they are safe and able to do so.

Neil Greig, Policy & Research Director from IAM RoadSmart, commented: “There are over 12.1 million drivers of 60+ according to the report. With many being healthy, fit and with over 40 years’ experience and knowledge, why shouldn’t they continue to drive?”

Dr Carol Hawley, Author of the report said: “We recommend the Government should conduct a comprehensive review of the driver licensing and testing system in relation to the ever-growing number of drivers over the age of 70 and beyond. We need to ensure that those who are healthy, fit, and capable remain safely on the roads. Currently in the UK, the only safety requirement for mature drivers is to renew their driving licence at the age of 70 by confirming to the DVLA that they have no medical issues.”

Overall drivers, asked in the survey, expected to continue driving for an average of 12.3 years.

In our survey the majority (79%) felt they were excellent drivers and would not consider giving up for years. Only a doctor/GP or optician/optometrist, who are considered the most influential people to give advice on giving up driving, were likely to convince them to relinquish their licence for health or eyesight reasons.

Neil Greig continued: “We need a joint education campaign to help drivers start to plan for the retirement of their driving licences at an earlier age, working in partnership with the government, health professionals, pension advisors, financial advisors, and transportation experts.”

“A wider range of easily accessible mature driver focused information is needed for consumers on accessible vehicle designs, mobility features, journey planning and mobility costs to help inform these campaigns. Mature driver reviews should be encouraged, and the government should consider the idea of offering them on prescription to encourage uptake and equal access.” 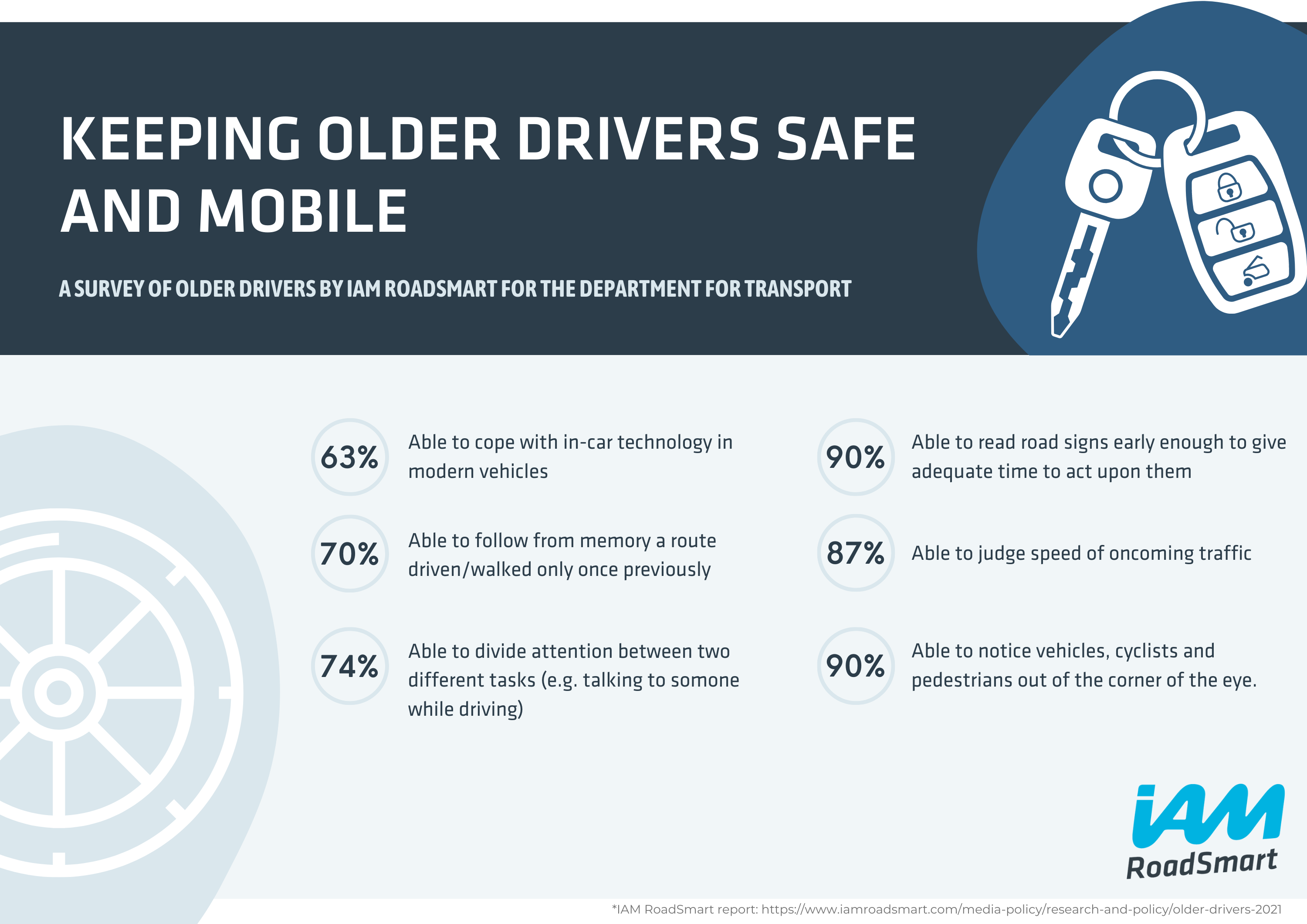 Survey findings on ability to drive

Neil added: “IAM RoadSmart, are already working with local authorities like Warwickshire, Lincolnshire, York and in South Wales, amongst others, on initiatives to help local residents update and improve their driving skills, increase confidence and stay mobile for as long as safely possible. We need more of these across the country.”

For more figures on demographic trends and the opinions of older drivers please see our infographic.

For more information about IAM RoadSmart, which helps to improve driving and riding skills through courses and coaching, visit www.iamroadsmart.com.

In a variety of situations 3,062 older drivers (60+) were asked to rate their ability. Situations included ability to read road signs early enough to act upon them, and ability to react quickly in an emergency.  Drivers and ex-drivers classified their ability in each situation as ‘very good’, ‘good’, ‘adequate’, ‘poor’ or ‘very poor’.

About IAM RoadSmart
IAM RoadSmart has a mission to make better drivers and riders in order to improve road safety, inspire confidence and make driving and riding enjoyable. It does this through a range of courses for all road users, from online assessments through to the advanced driving and riding tests. IAM RoadSmart is the trading name of all businesses operated by the UK’s largest road safety charity, the Institute of Advanced Motorists (IAM) and was formed in April 2016 combining the IAM, IAM Drive & Survive, PDS and IAM Driver Retraining Academy. The organisation has almost 85,000 members and campaigns on road safety on their behalf. At any one time there are over 7,000 drivers and riders actively engaged with IAM RoadSmart’s courses, from members of the public to company drivers, while our Driver Retraining Academy has helped 2,500 drivers to shorten their bans through education and support programmes.

To find out more about IAM RoadSmart products and services visit: www.iamroadsmart.com