Majority of motorists putting themselves at risk of drink driving

A survey commissioned by the UK’s leading independent road safety charity, IAM RoadSmart, has revealed that the majority of motorists are unaware of the amount of alcohol that will tip them over the limit, while half admit they are prepared to drive the morning after festive drinks or their Christmas party.

Indeed, of over 1,000 motorists surveyed, 50% confessed they were likely to get behind the wheel the next morning following festive drinks, even though it takes many hours before large amounts of alcohol leave the blood stream.

These admissions have concerned IAM RoadSmart, leading the charity to call for drivers to take more responsibility this festive period, plan ahead and be extra careful.

Neil Greig, Director of Policy and Research at IAM RoadSmart, commented: “Drinking and driving simply does not mix and every driver should plan to leave the keys at home rather than face a fine, lengthy ban or time in a police cell.

“Worryingly, the research also highlights that there is still real ignorance regarding how much alcohol is enough before it is illegal to drive. Although motorists may well think they know how many drinks will typically tip them over the limit, individual characteristics such as body weight, food consumption, gender and metabolism will also determine the reading.

“So, if you’re planning to drink alcohol at a Christmas celebration, do not try to calculate whether or not you are over the limit. It is always best to make it none for the road.”

The charity has also reiterated its plea to the government to roll out a smarter package of longer-term measures to help drive down the number of drink drivers on Britain’s roads into the new year. This includes a lower drink-drive limit to reinforce good behaviour, fast-track of evidential roadside testing machines to release police resources and tailored approaches to help drivers with alcohol problems.

Neil concluded with a warning for those considering getting behind the wheel this festive season: “A prosecution for drink driving this month will not only ruin your Christmas but also impact the rest of your life through public humiliation, loss of job, family break up and a criminal record.  At IAM RoadSmart we estimate that last drink that takes you over the limit could cost you up to £70,000!  If that isn’t a sobering thought then nothing is.” 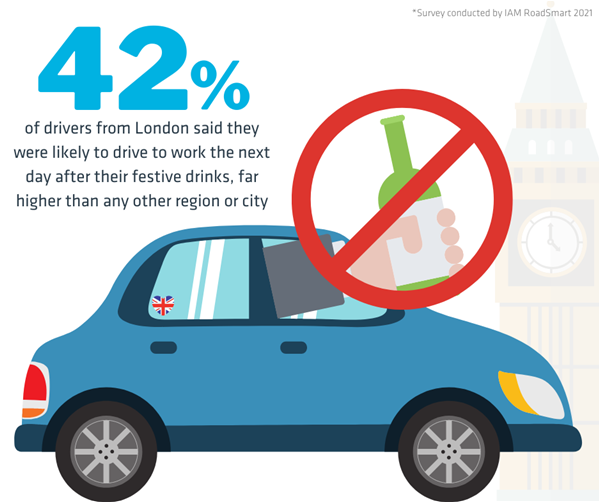