Motorists switched on to the dangers of driving in the dark

Many of Britain’s streets have been plunged into darkness in recent years as councils attempt to save money and redouble their efforts to shrink carbon footprints.

However, the cost of this decision is not without risk with the Department for Transport’s (DfT) statistics revealing there has been 102 deaths and 849 serious injuries on unlit roads with streetlights present in the period of 2016 to 2020. As you would expect given how common they are, the dangers of roads where there are no streetlights at all is even higher, with 1,599 deaths and 7,649 serious injuries also in the last five years.

This has led the UK’s largest independent road safety charity, IAM RoadSmart, to ask over 1,000 motorists their attitudes towards the dangers of driving the dark, with the majority of respondents agreeing that switching off streetlights has had a negative impact on personal safety and road safety.

57% of those surveyed agreed that unlit streetlights made their neighbourhood feel less safe, while 67% agreed that roads with unlit streetlights lead to more crime. Interestingly, lack of visibility (60%), colliding with a pedestrian (45%) and being at risk if your vehicle breaks down (42%) were ranked as the biggest concerns about getting behind the wheel in the dark.

Neil Greig, Director of Policy and Research at IAM RoadSmart, commented: “While IAM RoadSmart supports efforts to decrease carbon emissions and acknowledges the financial pressures faced by local authorities, such concerns expressed by drivers should serve as a reminder to decision makers that motorists possess legitimate concerns about driving in the dark. Therefore, any decision of when and where lights are switched off must be made with road safety as the top priority and with full consultation of local residents.”

In fact, such were some respondents concerns about driving in the dark, shockingly, nearly a quarter (23%) agreed that the prospect of walking on an unlit road would make them more likely to drive home over the drink driving limit rather than walking.

Neil added: “With over 35 million drivers on the roads, this statistic means that there could be over 8 million motorists tempted to get behind the wheel after a drink. While this is totally unacceptable, this also goes to show the fears some drivers have about walking in unlit areas.”

Neil concluded with a few words of advice on driving in the dark in this winter: “Motorists should reduce speeds on unlit roads in built up areas, raise their awareness of where these roads are, and plan journeys more carefully.

“Meanwhile, other road users such as pedestrians and cyclists should also familiarise themselves with roads that are unlit, as well as wearing high visibility clothing so that motorists can see them in dark conditions. This way, we can all play our part in driving down the number of incidents caused by unlit roads.”

Such concerns expressed by respondents has led to a pilot service, StreetSafe, to be created by the Home Office and National Police Chiefs’ Council. The initiative was established to help anyone to anonymously tell the police about public places where they have felt or feel unsafe because of environmental issues such as lack of street lighting, abandoned buildings, vandalism and social behaviour such as being followed or verbally abused. To find more visit, www.police.uk/pu/notices/streetsafe/street-safe.

And for more information about IAM RoadSmart, which helps to improve driving and riding skills through courses and coaching, visit  www.iamroadsmart.com. 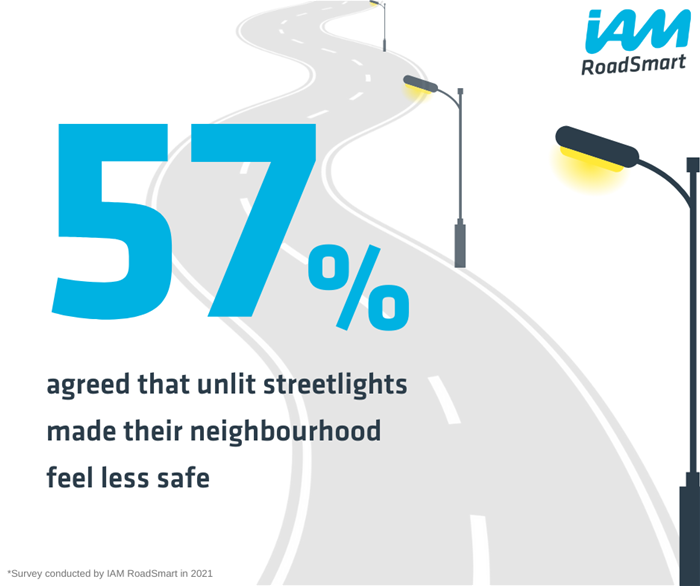